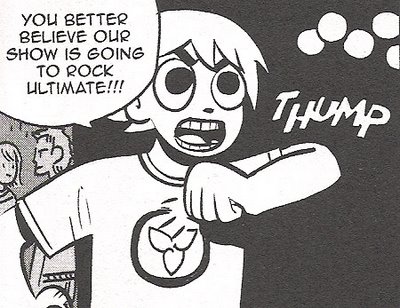 Ahoy there, we know all of you Scott Pilgrim fans out there are tired of opening multiple windows to see all the the trailers so we’re putting them all into one nice post for you to check out and point out some of the cool bits to look for! Plus, it gives me a chance to rewatch the trailers!

Highlights of this trailer are:

Getting to see more of Knives Chau as she witnesses Scott playing bass and letting out some fangirl scream before passing out. Personally, I’m not a huge fan of this, seems just cringe worthy. Scott trying to escape his apartment while Wallace is distracting Knives is funny though. The international trailer is also where we get to see Scott punch Roxie in the boob which is all good. Is it just me or does Gideon remind you of Jason Lee when he busts out the line about fighting him for Ramona? Also awesome is Brandon Routh as Todd Ingram doing the bit about being dust. So we got Captain America and Superman in this movie. This can only make this epic movie epically more epic.

Even though this trailer is kind of short, it’s a full on scene of Scott taking on the Lucas Lee stunt team. We get some cool moments by Scott and Wallace while Scott comes off as pretty bad-ass in his fights.

I think this is the first time we get to see Julie and we see the amazon ordering scene play out. We also get a super fast peek of Crash and the Boys, well, mainly Trasha on the drums for a split second. I also think that this is the first time we see Gidgeon and here him speak in the trailers. Since I am on a roll for using the word “also” it’s also pretty cool when Scott hits someone with the sword they turn into coins which makes me wonder…is Scott Pilgrim a murderer? Think about the family of those kids who got turned into coins! This movie should be R-Rated for the rampant murders!