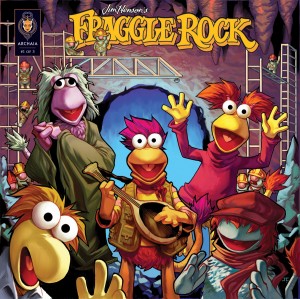 The Jim Henson Company and Archaia announced today that their first Fraggle Rock comic book miniseries makes its anxiously awaited debut in comic book shops this April. Issue #1 (of 3) will be available for pre-order in the February issue of Previews, and its debut will be followed by the release of Archaia’s Free Comic Book Day flip book, featuring Fraggle Rock and Mouse Guard, available for free on May 1, 2010. The announcement is the latest in the recent resurgence of “Fraggle Rock” licensing programs across all platforms and media that has included apparel, jewelry, plush and DVDs
“All of us at Archaia are so proud of how Fraggle Rock is turning out,” said Stephen Christy, Director of Development for Archaia. “We’re taking a lot of unique approaches with this series, from launching it in our popular 8” x 8” Mouse Guard format to bringing in incredibly talented indie creators such as Jeffrey Brown, creator of Incredible Change-Bots, and Jeremy Love, creator of Bayou, to share their visions of this classic Jim Henson Company creation. We’re working very hard to make sure this book is a fresh take for fans of the show and will also appeal to new audiences, and I’m excited that readers will be able to fully dive into the world of Fraggle Rock with issue #1 in April and our Free Comic Book Day special in May!”

“‘Fraggle Rock’ has devoted fans who have told us they want more adventures from Gobo and the gang and we know Archaia is the perfect partner to tell these new stories,” said Melissa Segal, The Jim Henson Company’s Sr. Vice President, Global Consumer Products. “With exceptional attention to detail and excellent storytelling, Archaia is especially suited to introduce Fraggles to young readers who may be meeting these characters and their fantastical world for the first time.”

“Fraggle Rock” began as a children’s television series launched by Jim Henson in 1983 about an imaginary, colorful and fun world comprised of creatures called Fraggles, Doozers and Gorgs. The series focused on one group of Fraggles in particular: Gobo, Mokey, Red, Wembley and Boober, a very close group of friends, each member having their own unique personality. The show ran for four seasons and became an international award-winning sensation. More than 25 years later, “Fraggle Rock” fans continue to celebrate and support the brand which continues to boast a strong following around the world and successful merchandising programs, including a recent series DVD release and the new Fraggle Rock Forever line of designer apparel and jewelry.

The Fraggle Rock comic book series closely follows the themes and tone set forth in the original television program and will be accessible not only to fans who grew up watching the show, but to a new generation of readers as well. Each Fraggle Rock issue features one main story and two back-up tales written and drawn by some of the most imaginative creators in comics.  Issue #1 (full color, 32 pages, 8” x 8”, $3.95, Diamond Order Code FEB10 0672) contains contributions from Jeffrey Brown (Incredible Change-Bots), Katie Cook (MySpace Dark Horse Presents) and newcomers Jeff Stokely and Heather White. (There are two covers for issue #1, to be distributed in a 75/25 split. The main cover is by Jeff Stokely and Lizzy John, and the chase cover is by Jeffrey Brown.)

Additionally, each comic will contain fun activity pages for kids, such as games, puzzles and arts and crafts projects so that a new generation of fans can further immerse themselves into the fantastic world of “Fraggle Rock.”

Visit http://freecomicbookday.com for more information and to find the nearest participating retailer near you.

Archaia and The Jim Henson Company are also partnering on Dark Crystal and Labyrinth mini-series for release later in 2010.

About The Jim Henson Company

The Jim Henson Company has remained an established leader in family entertainment for over 50 years and is recognized worldwide as an innovator in puppetry, animatronics and digital animation. Best known as creators of the world famous Muppets, Henson has received over 50 Emmy Awards and nine Grammy Awards. Recent credits include the Emmy® nominated “Sid the Science Kid,” “Dinosaur Train” and “Pajanimals.” Features include “The Dark Crystal,” “Labyrinth,” “MirrorMask,” and “Unstable Fables” and television productions include “Fraggle Rock” and the sci-fi cult series “Farscape.” With additional locations in New York and London, The Jim Henson Company is headquartered in Los Angeles on the historic Charlie Chaplin lot, complete with soundstage and postproduction facilities.

Independently owned and operated by the five adult children of founder Jim Henson, the Company is also home to Jim Henson’s Creature Shop™, a pre-eminent character-building and visual effects group with international film, television and advertising clients, as well as Henson Recording Studios, one of the music industry’s top recording facilities known for its world-class blend of state-of-the-art and vintage equipment. The Company recently launched “Wilson and Ditch: Digging America,” a web destination for PBSKIDS.org featuring the Company’s Emmy-winning animation technology. The Company has also announced the creation of The Hub, a third party licensing banner established to acquire and service global consumer products programs for external brands and entertainment properties. http://www.henson.com

Archaia has built an unparalleled reputation for producing meaningful content that perpetually transforms minds. With a slate including such popular Eisner-Award winning titles as Mouse Guard and The Killer, as well as Awakening, Gunnerkrigg Court, Robotika, Killing Pickman, Artesia and the Publisher’s latest additions of Titanium Rain, God Machine, Roddenberry Productions’ Days Missing, The Jim Henson Company library and Mr. Murder Is Dead and Lucid with Before the Door Pictures, Archaia has become synonymous with quality content.