Film Journal got an update from director Joe Johnston about his next project, Marvel Studios’ The First Avenger: Captain America:

“We’re in prep,” Johnston says. “Rick Heinrichs is production-designing and we’re set up down in Manhattan Beach [California]. It’s the part of the process that I love the most,” he enthuses. “We have eight or ten really talented artists, and we all just sit around all day and draw pictures and say, ‘Hey, wouldn’t it be cool if we could do this?’ It’s that phase of the production where money doesn’t matter: ‘Let’s put all the greatest stuff up on the wall and [then later] see what we can afford.'” The film, he says at this early stage, will begin “in 1942, 1943” during World War II. “The stuff in the ’60s and ’70s [comic books] we’re sort of avoiding. We’re going back to the ’40s, and then forward to what they’re doing with Captain America now.”

Meanwhile Bleeding Cool put up a very interesting piece regarding Marvel Movie costumes recently which looked at designs by Kotobukiya. They are exclusive Marvel licensed movie characters for statues to hint at what may end up being the costume designs of the title characters in Thor and The First Avenger: Captain America.

Here are a pair of shots of each of the two statues – you may click to enlarge to see the details. 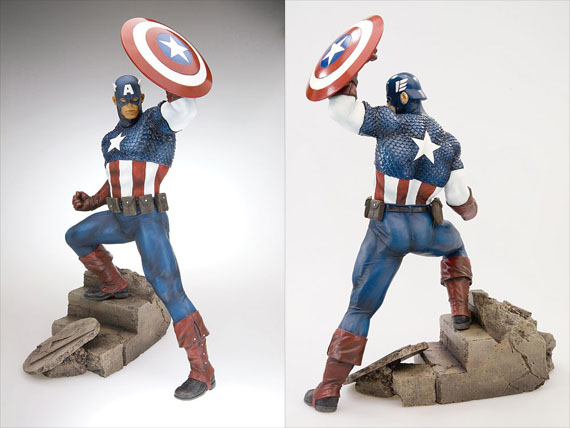 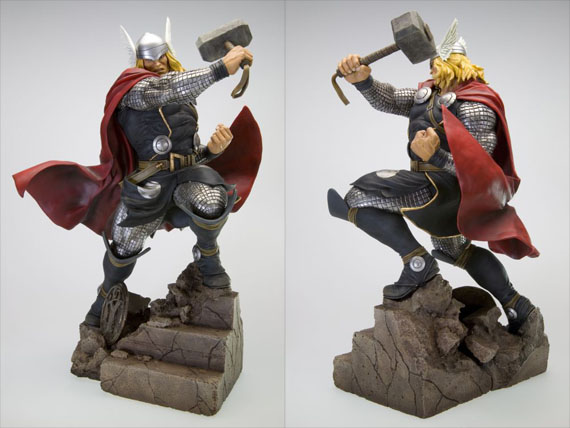 The First Avenger: Captain America has set a July 22, 2011 release date for the film.