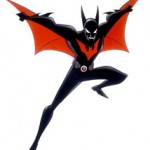 Pfft, Okay, everyone knows that headlines should be written by poets not film school drop outs so don’t judge me for this one. But I come bearing gifts – fresh from today’s Toronto Fan Expo’s DC Universe Panel DC’s biggest alpha male (seriously, you should see this guy work a room, I want to hire him to be the MC at my next wedding) Dan Didio announced that there was going to be a.. wait for it:

A six issue Batman Beyond mini-series.

Yeah, that’s right; one of the best things that came out of the DCAU (That’s DC animated universe for the uninitiated) Batman Beyond was the futuristic (it was set in 2039 – which is thirty years away, and trust me when I say that they had jet packs) continuation of the Batman mythos.

Centered around an old and decrepit Bruce Wayne as he coaches the new Batman (teenager Terry Mcguiness) on the ins and outs of being grim, stopping crime and broodingly posing next to gargoyles. It was considerably darker than most other children’s programs at the time, ironic as producer Bruce Timm recalls (I should note that I got this point from wikipedia, so chances are it’s not exactly true.) it was originally conceived as a kid-friendly Batman cartoon. It ran 52 episodes. (And on a side note: Darwyn Cooke designed the opening title sequence. So yeah, it was awesome.)

Didio remained mum on the creative team, but said that we’d be seeing the mini series in the first half of 2010.