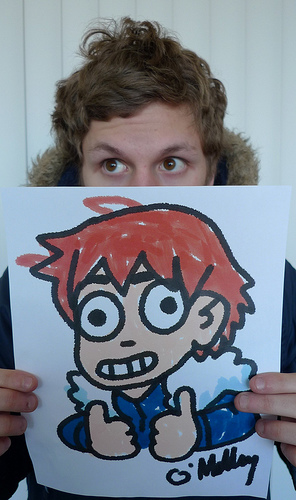 BRAMPTON (ON) – Brampton native Michael Cera has made quite a name for himself in Hollywood, having starred in several popular movies and television shows. It’s his latest movie, Scott Pilgrim vs. The World that has one local business extending the actor an interesting invitation.

“The Scott Pilgrim movie is based on a popular comic series, so I think Michael Cera should come to his hometown comic shop for a signing on the weekend the movie premieres.” Says Kevin Hickey, manager of Stadium Comics located at Shoppers World Mall in Brampton.
“We are declaring August 13th (the release date of the movie) to be Michael Cera Day here at Stadium. We’ll roll out the red carpet for him. Residents of our city would love to show their appreciation for his work and meet him in person, and we think our store is the perfect place for that to happen!”

Hickey admits that they have not been in touch with anyone from Michael Cera’s camp, nor do the operators of the shop have any idea how to make the scheduled guest appearance a reality. Citing movies such as Wayne’s World 2, along with countless television sitcoms he watched growing up, Hickey believes that if the store just puts on the event, chances are good Cera will show up.

“Basically what watching those films and shows taught me was that if you want a celebrity to make an appearance at an event you are organizing, just tell everyone that they’ll be there, and then the universe will align and make it happen – like with Aerosmith in Wayne’s World 2. It works even better if you are organizing the event just to impress a girl.”

It is unknown at this time if the Brampton-born Cera will be in town on that weekend for the premiere of the movie, in which the city of Toronto serves as the backdrop for the story. The in-demand actor spends much of his time in Hollywood these days. That uncertainty isn’t deterring the management team at Stadium Comics.

“We have a contingency plan in place,” states Rob Sinnott, who is also a manager at Stadium. “Should Michael be too busy to appear at our store, we’ll also accept a guest appearance by one of Brampton’s other celebrities – such as comedians Scott Thompson or Russell Peters, NHLer Rick Nash, or any of the Ashmore twins. We’d just ask that they try to look a little like Michael Cera, or adopt some of his mannerisms for the day.”

As unlikely as the appearance seems, the staff at Stadium Comics are forging ahead with plans for the event. Even if they succeed in attracting Cera to their event, they won’t be able to pay the actor for his time.

“We can’t really afford an appearance fee, but our mall has an excellent food court and we’d be happy to buy Michael lunch. It helps that we are located next to a Cinnabon.”

With or without the guest of honour, Michael Cera Day takes place on August 13th at Stadium Comics in Brampton. You can get all the details at http://www.sidekickcomics.ca/content/events