Amazon launched their new Kindle line yesterday, most notably the Kindle Fire, a 7″ colour tablet.  Along with this came word from ICv2 that Amazon will have 100 exclusive DC graphic novels available. 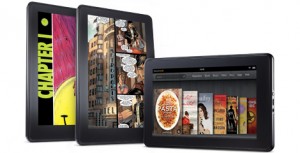 [quote]…with 100 exclusive DC graphic novels, including the bestselling graphic novel of all time, Watchmen, which has never before been available digitally. Others include Batman: Arkham City, Superman: Earth One, and Green Lantern: Secret Origin.[/quote]

Some checking on the Amazon website showed that these graphic novels will be available November 15th in the Kindle format.  That means anyone with the Kindle app will be able to read them, so the exclusivity rests with Amazon offering them before anyone else.  Unfortunately Watchmen at $9.99 is the only DC Kindle ebook listed: at that price it’s a real deal but it’s also been in print forever so it could be a loss leader for Amazon. 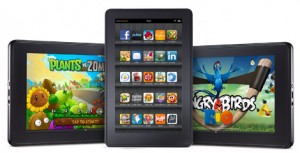 Also of interest was the Comixology app showing up on the device at the product launch: bottom right in the center image above.  While they’ve been able to rule the roost of digital comics distribution so far I don’t see much changing.  Amazon is going after the graphic novel complete story trade paperback market and Comixology focuses on the monthly comic.  At least this explains the dearth of graphic novels in the market thus far.

Update: DC has made their official announcement.

BURBANK, Calif., Sept. 29, 2011- DC Entertainment, the first publisher to offer more than fifty comic book titles on the same day in digital and print, is now taking the world of digital books by storm.  The comic book giant has worked with Amazon to bring 100 of its original graphic novels exclusively to Amazon’s newly announced Kindle Fire, including best-selling graphic novels  WATCHMEN, BATMAN: ARKHAM CITY and SUPERMAN: EARTH ONE, which are available for the first time digitally.

“We’re thrilled to work with the leader in digital books to bring many of the world’s most beloved and best-selling graphic novels to Kindle readers,” stated Jim Lee, co-publisher of DC Entertainment. “We’ve learned from the success of DC Comics – The New 52 that making our graphic novels available whenever and wherever our readers want is critical to the future growth and health of our publishing businesses–both in print and digital format.”

“We’re excited that DC Entertainment has made 100 of their graphic novels available for customers to read exclusively on our just-announced Kindle Fire,” said Russ Grandinetti, Vice President, Kindle Content. “Some of these graphic novels, including ‘Watchmen,’ the bestselling — and considered by many to be the greatest — graphic novel of all time, have never been available before in digital format, and we think customers will love them.”

The following 100 DC Entertainment titles will be available in the Kindle Store, with more titles to be added in the near future.

*Available only in North America