This week marks my second anniversary as a columnist for Comic Book Daily so in a semi-self congratulatory mood, I figured I’d take a look back at the past two years and let you in on some of my favorite moments and the behind the scenes of those moments.

Now to be fair the beginning of my run here started with a man named Joe Quesada.

My podcast TATANS managed to snag an interview with Joe and Pete DeCourcy (who was EiC at the time) asked if he could have the text version of the interview. We agreed if Pete would take photos and it grew out of that.

And by “grew” I mean Pete would occasionally badger me for more articles and we just decided to make a column out of it. So here’s my favorite moments and a few predictions: 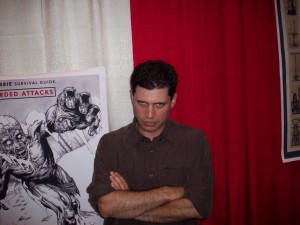 Without a doubt, Max Brooks has been my favorite interview. I’ve been lucky enough to chat with him twice and he is generally awesome to deal with. Polite, funny and a solid writer, the first interview I did with him for my podcast, we had a back up plan. You see, unknown to a number of people out there, Max is the son of Mel Brooks. Not knowing what kind of guy Max was, we decided that if Max was a jerk, the interview would turn into a one sided discussion about how Blazing Saddles is awesome. Luckily, Max is far from being a twit and the first interview went off great. The second interview (the text portions summed up for this site) was even better as we were used to Max’s humor and Max remembered us.  GI Joe Hearts and Minds was just about to be released and he was very proud of his work (rightfully so as it was a solid mini series). He even was able to quote Roadblock.

I’m just curious what happened to the secret graphic novel he talked to us about was?

Interview That Scared Me: Andrew Vachss

I had been a huge fan of Vachss’s when I got word about his graphic triptych haiku book , Heart Transplant, I used it as an excuse to try and set up an interview with him.

Then I got the interview and I went into panic mode.

Mr. Vachss is a best selling author and probably one of the more nobler human beings on the planet. His novels finance his career as a lawyer where he represents children for free. His entire literary career is about the mission; Protect the kids from the abusers, make the abusers pay as hard as possible in the legal system.

Andrew Vachss is in many ways the closest to a real life Batman as you’re going to get.

So when I heard his voice on the other end of the phone I almost hung up. I summoned up the courage and continued with the interview I requested. I think it’s a good interview but it suffers a little bit from being awestruck and one piece of bad information I had researched but otherwise I accomplished the four things:

I did an interview with Andrew Vachss.

I got the word out about a project I thought was definitely worth it. (Speaking of which, if you haven’t checked out Heart Transplant yet, you should)

I ended up getting a preview copy of his latest book, The Weight (a great read and available in paperback in Nov). 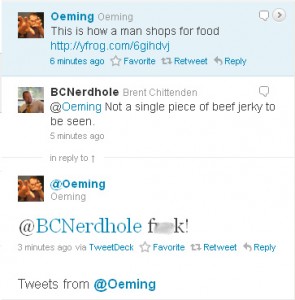 So here’s the scenario. Geof Darrow is one of the most unique artists working in comics. He is the kind of artist any good writer would do a lot of dirty things to work with, myself included (oh what I wouldn’t give to write something for Geof to draw… like even if it just involved rabbits and clowns, I’d come up with something awesome). Darrow was going to be attending the Fan Appreciation convention that Hobbystar was putting on last year. Geof doesn’t have much of a web presence so I had no idea how to contact him to set up an interview.

But I had an idea Andrew Vachss and his people would.

Vachss had worked with Geof on a few occasions (most notably a Shaolin Cowboy pulp novel that sounds like five shades of awesome) and out of anyone I knew might be able to tell me how to get a hold of him, it was Vachss and his team at The Zero.

So I dropped Andrew’s people an email and shortly after I was in touch with Geof Darrow.

For a man of such talent, it was great to find out he’s a nice guy to boot.

Geof had some of the best stories I’ve ever heard. If you ever get talking to him, ask him about the Hanna Barbara Polish Pencil Sharpener. Geof was kind and generous with his time and spoke to my girlfriend about her knitting. We spoke a lot about upcoming projects including the return of Shaolin Cowboy and we also just talked a bit.  I’m hoping he’ll make his way back here as he has a sketch book I’d love to purchase that’s currently sold out.

With any luck and justice, Fearless Fred Kennedy will be a name more people know in comics over the next two years. Why do I say this? Am I sucking up? Are we buddies? Am I looking for a spot on Teletoon at Night? Nope. Fred has impressed me from the get go with both his skill as a writer and just his general passion for comics.

Kennedy is a successful radio announcer and voice over artist. It’s how he makes his living and pays the bills. Big Sexy Comics probably doesn’t do that which means Fred does comics because he LOVES them. You’d be amazed at how far passion will get a person. I think his work on Big Sexy Comics various books is not only a great indicator of his talent but of a writer with a lot of range and I think it would do Marvel or DC a lot of good to take a look at him.

And for those who doubt my prediction anyone remember some comic called Battle Pope? Weird little comic that I think eventually went to Image…wonder what happened to the guy writing that… oh right… that was Robert Kirkman.

This occurred during the trip to the 80’s toy show a few months back. We were on the 400 south bound.

Two years is a long time for a weekly column and honestly if it weren’t for the following people, I probably would have dropped it.

Thanks go to the entire Blue Beetle crew both new and old. Without my Wednesday visits, I might run out of columns. This also goes to the members of the Blue Beetle Diners Club.

Thanks to various members of the Nerd Mafia who nicely re-tweet about these posts or like them on Facebook especially Alex James (who has been my sounding board for many a column).

Thanks to John Pollock and Wai Ting of The Fight Network and music gurus supreme, Alan Cross and Jeff Woods. Over the past two years, whenever I’ve had a question about doing interviews in terms of format and style, they’ve been my go to guys and have patiently put up with my nonsense.

Thanks to the staff of CBD especially Ed, Walter, Pete and Scott who put up with me at cons and the fact my columns sometimes look like a five year old wrote them.

And special thanks to Gen, who puts up with my nerdiness more then she should have to and she does it with a smile.

Two years and now on to year three! I think this is the year where I get to do a soft re-boot and become some what grittier with massive shoulder pads.