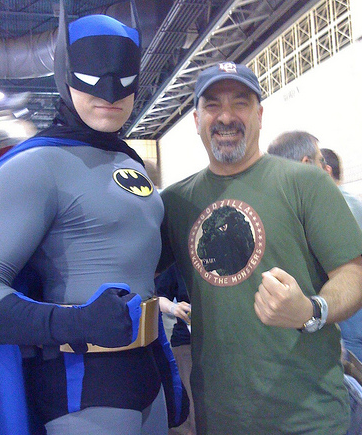 So, it looks like the DC U as we know it has a brand new ‘Trinity’ as of this morning. Dan DiDio and Jim Lee will be Co-Publishers of DC Comics. Geoff Johns will be Chief Creative Officer. (And  John Rood, and Patrick Caldon will be Executive Partners, but seeing as that would ruin my whole Trinity allusion we’ll just pretend like this doesn’t really matter.)
So We decided to see how the twitterverse reacted and so far it’s pretty positive.  Geoff Johns has a polarizing effect on many readers – I haven’t read many reviews that weren’t either in the deep, deep love or seething hatred for his writing, but by all accounts the guy is known for being one of the nicest guys in the industry.
Jim Lee – well, what can we say about Jim Lee. I believe Rich Johnson over at Bleeding Cool hinted at him earlier for this position, but seeing that I can’t find a link or mention of it anywhere, I’ll just imagine I dreamt it all… which makes sense as I often dream of Jim Lee’s art.
And finally… Dan Didio… he’s considered by many to be a villain, but his strong hand has guided many of DC’s best and most experimental years. Love him or hate him he’s responsible for 52, All-Star Superman, The One Year Later Jump (which gave us some pretty fun stories) and Final Crisis.

Andy Diggle @jimlee00 @GeoffJohns0 Let me join the avalanche of congrats to you all. Great team!

Andy Kuhn @jimlee00 @geoffjohns0 Congrats on the new posts! and congrats to @andykuhn for his promotion to chief internet suck-up czar!
Dan Slott I think promoting @GeoffJohns0 to this position is the smartest move DC EVER could’ve made! And it couldn’t happen to a nicer guy! 🙂

Rob Liefeld Congrats to @jimlee00 & @GeoffJohns0 on your new posts at DC Comics.

Chris Weston @GeoffJohns0 Congratulations! (and don’t forget who drew your big break in comics!) 🙂
Tony Isabella @GeoffJohns0 Congrats. I’m willing to be your alibi if anything should happen to Dan or Jim. Y’know, like a tragic accident or something.
Sterling Gates Very, very excited about the future of DC Comics. Aren’t you?

So there you have it, we’ll update it more as the reactions pour in!