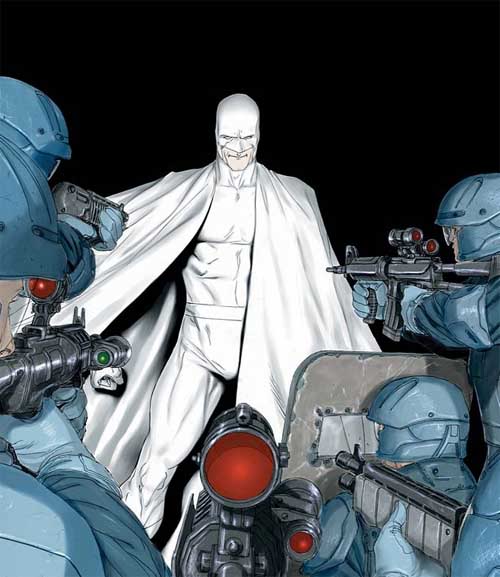 According to Rich Johnson over at Bleeding Cool is announcing that Steve McNiven – suffering from a bad back and a kidney stone – has let it be known that “Nemesis #2 has been indefinitely delayed, as he’s still trying to complete the pages.”

While we all expected that Nemesis will be late (I can’t really think of one Millar project that managed to have every issue ship on time) this leaves the project completely up in and air, hopefully Mr. McNiven will start feeling better and as his health improves and he’ll be able to get to work on the project so that I can purchase the inevitable hardcover collection.

While this story was based on reporting by a Bleeding Cool contributor talking to McNiven at C2E2, Mark Millar has repudiated the report on his board. Millar writes;

People have got in touch and asked what’s happening as some nonsense online about Nemesis delayed indefinitely. Steve had a couple of health problems that slowed him down, but he’s almost finished issue two and isn’t doing anything else until he’s finished issue four (the series finale). I don’t know where this started (perhaps Chinese Whispers at Chicago), but issue two will be out in a few weeks and we’re probably looking every two months for the remaining two issues.

PS We have our director and the deal is being ironed out this week. He’s literally my number one choice and all the mods, who know who he is, are very excited. I’ve finished the comic series and the scripts are now in the hands of the director who will start adapting next month. HUGELY EXCITING!

I don’t really care though.

Oh, I’m not really in a rush – I figured I’d eventually pick it up, but not without reading the first issue.

So here’s my take on Nemesis:

It’s Millar’s attempt to do one of Warren Ellis Avatar stories.

It’s even got all of Ellis’ writing tics.

Everyone is brilliant and everyone name drops people that are equally as brilliant but fairly obscure. the villain is not afraid of ultra-violence  and it ends on a note that’s on par with one of Ellis’ zero issue teases.

Look, I could be way off base, but thus far this is the vibe I’m getting from it. Millar is a skilled writer who can be pretty lazy when it comes to plot. He’s more known for his moments than for actual storylines. (With maybe the exception of Superman Red Son ..which has one of my favourite endings in any comic ever.)

Leave comments below and tell me how crazy I am.