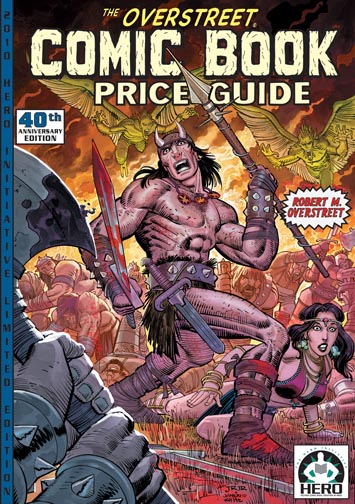 Artist John Romita, Jr., inker Klaus Janson, and colorist Dean White have recreated 1970’s CONAN THE BARBARIAN #1 for the cover of a limited hardcover Hero Initiative variant edition of THE OVERSTREET COMIC BOOK PRICE GUIDE #40. This is the first time an exclusive edition of the long-running industry institution has ever been issued.

Limited to 500 hardcover copies, the Hero Initiative edition of the 40th anniversary GUIDE will go on sale on Wednesday, July 21, 2010 at Comic-Con International: San Diego, the same day the regular editions of the GUIDE go on sale nationwide.

“For some time now, both Steve Geppi and Bob Overstreet have been looking for a way to get the GUIDE actively involved with the Hero Initiative, which isn’t too surprising since both of those gentlemen and the GUIDE itself reflect a deep love of the medium and its heritage,” said The Hero Initiative’s Jim McLauchlin. “This year, as the GUIDE celebrates its 40th anniversary, we brought up the idea of doing a limited edition exclusive cover as a fundraiser. It came together very quickly.”

“We’re very happy to be able to promote such a great cause,” said Steve Geppi. “It’s impossible to really love comics without acknowledging the creators who set the stage for where we are today. Without them, what would we have? The Hero Initiative’s role in helping creators who have had some difficulties is essential if we’re truly interested in honoring our past and present as we move toward tomorrow.”

At the show, individual copies of the book will be on sale for $35, and it will also be available as part of premium packages offered by Hero. Through the efforts of all involved, the Hero Initiative will be able to receive the full cover price for each sale.

“This was truly a collaborative effort,” said J.C. Vaughn, Associate Publisher of Gemstone Publishing. “Mark Huesman, the GUIDE’S Creative Director, suggested the idea of a recreation of CONAN THE BARBARIAN #1 for the cover, since that landmark issue is also celebrating its 40th anniversary. Jim McLauchlin and the Hero Initiative secured the services of John Romita, Jr., Klaus Janson, and Dean White to provide the fantastic art. Since John is exclusive with Marvel, Jim also got Marvel’s permission for him to do the project. Dark Horse’s Mike Richardson arranged the permission to do the cover with the folks at Conan Properties International, LLC. Angelo Messina at WorldColor arranged for his company to donate the plate change and the limited edition portion of our print run. If any one of these things hadn’t happened, we wouldn’t have been able to do this project in this way.”

The Conan edition of THE OVERSTREET COMIC BOOK PRICE GUIDE #40 features Romita, Jr., Janson, and White’s recreation of the cover for CONAN THE BARBARIAN #1 by Barry Windsor-Smith, originally published by Marvel Comics in 1970, the same year the first edition of the GUIDE debuted. Conan is now published by Dark Horse Comics. Author and publisher Robert M. Overstreet, who will be one of Comic-Con’s special guests this year, will appear at the Hero booth during the show (schedule to be announced).

About The Hero Initiative

The Hero Initiative is the first-ever federally chartered not-for-profit corporation dedicated strictly to helping comic book creators in need. Hero creates a financial safety net for yesterday’s creators who may need emergency medical aid, financial support for essentials of life, and an avenue back into paying work. It’s a chance for all of us to give back something to the people who have given us so much enjoyment.

Since its inception, The Hero Initiative has had the good fortune to grant over $400,000 to the comic book veterans who have paved the way for those in the industry today. For more information, visit www.heroinitiative.org or call 626-676-6354.