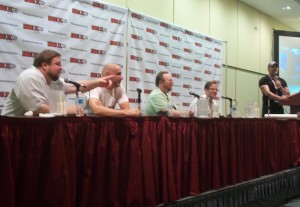 The big event this year for X-Men has been Avengers vs X-Men, or AvX.  We’ve been told that AvX will change the Marvel Universe as we know it and will lead into Marvel Now!  Which will recharge and reinvigorate the Marvel Universe, not reboot it.  The reshuffle will give the creators more ideas for great stories.

The Marvel panel then told us what we can expect to hit the comic shelves this October and November. 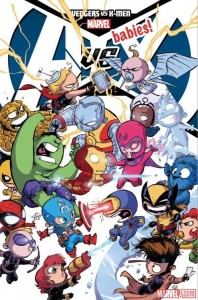 First on the docket from the X-Men titles is Avenger Babies vs X-Men Babies.  The whole idea may sound ridiculous but I think it will be strongly supported with great sales.  There are many fans who love the “cute” images and storylines and I think it is something Marvel really needs.  The title will be written by Skottie Young and the art will be by Gurihiru, a Japanese illustration team.

The next title for Marvel will be their flagship title (in my opinion) and it is Uncanny Avengers #1.  The book will be written by Rick Remender with art by John Cassaday, which I can’t wait for because Cassaday is one of my favourite artists.  The plot of the book will be Captain America and Wolverine are teaming up to take on Red Skull who has come up with a new plot and only the combined might of the Avengers and the X-Men can stop them.

Uncanny X-Men #20 will be the last issue of X-Men.  Due to the consequences of AvX, the X-Men team will no longer exist.  Which it will be replaced by All New X-Men #1 (Nov 2012).  In this title the original 5 X-Men (from the past) will come to the present (their future) with the help of the present time Beast.  The original 5 X-Men will see how the future has changed and how Xavier’s original vision of his team is very different now.  The panel compared it to Days of Future Past.

The other big news to come out at the panel is the announcement that artist Ramon Perez will be joining the Wolverine and The X-Men team.  Perez is an Eisner award-winning artist and his addition to the book is very exciting news.  Ramon Perez said that Wolverine and the X-Men encapsulates what Chris Claremont’s Uncanny X-Men was in the 80’s.

Another title that will end in Oct 2012 is X-Men Legacy.  Issue #275 will be the final issue.  The focus of Legacy was Rogue and her relationship with Magneto and Gambit.  X-Men Legacy will relaunch in Nov 2012 with X-Men Legacy #1.  The new Legacy will spotlight Legion who is the son of Charles Xavier.  He is one of the most powerful and psychotic characters in the X universe. 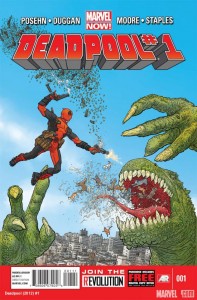 Deadpool is another series that will wrap in October and relaunch in November.  Issue #63 will be the final issue and issue #1 will see a new creative team.  The new writing team will be Brian Posehn and Gerry Duggan.  Brian Posehn is a very funny stand-up comic who has been seen on the Sarah Silverman Program and Mr. Show.  If you think the Crimson Comedian is funny now, he’s only going to get funnier.  The news that excites me the most about the relaunch of Deadpool is that Geoff Darrow is going to be doing the covers for the series.  I think the addition of Darrow’s covers will change the look and feel of Deadpool and it may be a title I will pick up every month.

The first story line for Deadpool is called Dead Presidents.  Several U.S. Presidents who have died come back to life.  S.H.I.E.L.D. gives Deadpool the task of killing these resurrected Presidents.  I wonder, will Deadpool shoot J.F.K. from the book depository again?

The other big news for Deadpool this year is the Deadpool video game.  We got the opportunity to see the video game trailer.  It was edited from the SDCC release version.  The one at Fan Expo was more… family friendly.  It featured more chimichangas and cats.

In November The First X-Men #4 will feature a story about the first mutant team that was put together by Wolverine.  The creative team on that will be Christos Cage and Neal Adams.  It will fill in some of the plot holes within the X Universe.

New Mutants #50 will be the last issue for that title.  Many of those characters will move over to Jonathan Hickman’s Avengers book.

Age of Apocalypse #9 (Nov 2012) will see Wolverine as the new Apocalypse.  In this alternate universe Wolverine is preparing for the extinction of human kind.  The only ones who can stop him, and who will be heroes in the story are the villains in the regular X-Men universe.

Another title that will launch in Oct 2012 is Wolverine Max #1.  This title will be a different look for Wolverine.  It will offer a slightly different origin for our favourite Canadian mutant.

It looks like the editing and creative team over at the X-Offices at Marvel have a lot in store for our favourite mutants and judging by the reactions to the panel attendees, they are very excited for what’s coming from Mighty Marvel.

For those who haven’t seen it, here’s the Deadpool video game trailer, without the chimichangas and cats.