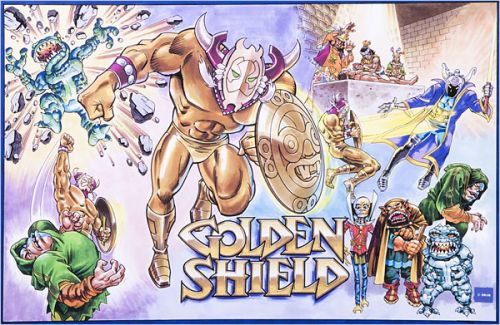 The New York Times has a great article about Ruby Spears/Sid & Marty Krofft (I was born too late to have experienced the existential dread that was  H.R. Pufnstuf) productions’ plan to develop some long-lost Jack Kirby concepts. Kirby apparently created scores of new characters while working as an artist for Ruby-Spears animation in the 1980’s, and the art on display in the piece is supposedly only the tip of the proverbial iceberg.

The article showcases some wonderful, and very 1980’s, character concepts from the king of comics, including what appears to be a superteam of stage magicians, a female, super-villain-fighting Indiana Jones archetype, and a wonderfully off-the-chain, purely Kirby team called “The Gargoids”. Golden Shield,” about an ancient Mayan hero seeking to save earth in the apocalyptic year 2012 – basically similar to Morrison and Millar’s Aztek – but like a whole bunch of years earlier and probably as bat shit insane as Kirby could be.

Apparently, there are crates of old Kirby stuff archived by Ruby-Spears, and whether or not Kirby’s legendary status is enough to propel these inventive, but decidedly idiosyncratic creations into the mainstream, is up in the air. At the very least, this stuff could make a kick-as coffee table book.