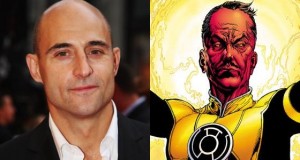 The guys at MTV News got an exclusive with the director of the Green Lantern Movie; Martin Campbell to confirm that it won’t be Jackie Earl who plays Sinestro but Mark Strong instead. He also dropped that we will be seeing the likes of Kilowog, Tomar-Re and Abin Sur popping up in the movie as well.

“Well, Kilowog will be,” said Campbell. “Tomar-Re is in it. Sinestro is in it. Abin Sur is in it. All the origin people. Carol [Ferris], of course, who will be played by Blake Lively. All the main characters are there, and it’s a complex story. The origin story of Green Lantern is complex, probably one of the most complex, which makes it a challenge to get it right.”

In the comic books, Sinestro is a former Green Lantern who trains Hal Jordan (played by Ryan Reynolds), only to become one of Jordan’s greatest enemies when he leaves the cosmic police force.

These characters are pretty logical choices given that this is an origin story and all you comic fans out there know that Abin Sur is the one who gives Hal his ring while Kilowog acts as the drill instructor for all Lantern recruits and Tomar-Re is the first of them to befriend Hal. So not much of a surprise there.