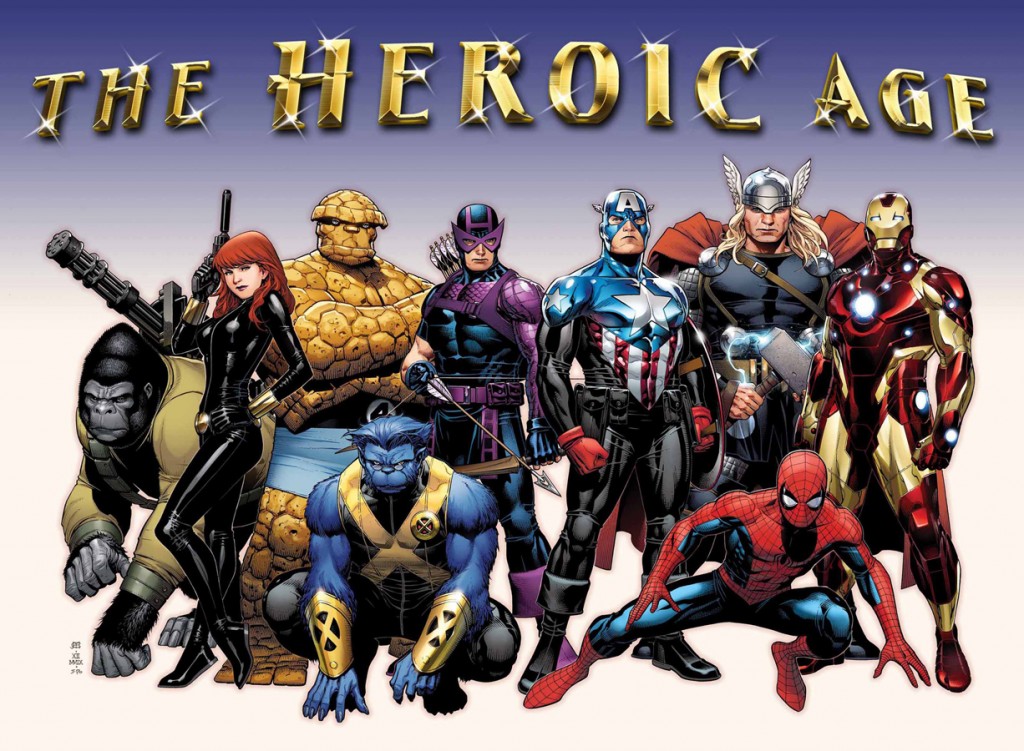 Marvel Comics is proud to announce The Heroic Age, the dawn of an exciting new era of heroism in the Marvel Universe! Beginning in May 2010 with the release of AVENGERS #1, The Heroic Age ushers in a brighter Marvel Universe and a bold new era for the world’s greatest super heroes as they emerge from darkness with a renewed sense of hope and optimism, leading to the formation of all new teams with new members…and brand new characters! Titles branded with the Heroic Age banner offer a perfect jumping on point for readers new and old alike, as the top comic book creators in the world deliver a Marvel Universe like you’ve never seen before!

Over the past few years, the Marvel Universe and its citizens have found themselves living in a dark age of despair. Beginning with the disbanding of the Avengers, the heroes of the Marvel Universe have been caught in a demoralizing downward spiral that has included the genocide of the mutant population, a divisive civil war between heroes, the assassination of Captain America, a worldwide subversive alien infiltration and invasion, and the media-fueled and publicly-supported ascension of the Green Goblin’s civilian identity, Norman Osborn, to power and control of the United States. Now, the heroes have united once again, stronger than ever and are prepared to face the dangers that lie ahead.

“Our heroes have experienced some of their greatest trials and tribulations recently, but now there’s going to be a renewed hope among their ranks,” said Joe Quesada, Chief Creative Officer & Editor-in-Chief Marvel Entertainment LLC. “As our heroes emerge from the darkness, the Marvel Universe is going to be a more optimistic place than we’ve seen in a quite awhile. But that doesn’t mean we’re making things easy for our characters!”

From the tone of the storylines, to the stunning new artistic look, The Heroic Age ushers in a dramatic new vision of the Marvel Universe. Marvel’s most elite characters will be at the center of The Heroic Age, including Iron Man, Captain America, Thor, the Fantastic Four, the Avengers and more!

David Gabriel, Senior Vice-President of Sales & Circulation, Marvel Entertainment LLC. added “We’ve been working out the details of THE HEROIC AGE for about a year now. The plan is to give old and new fans alike the perfect place to jump into the Marvel Universe without feeling like they’ve missed out on anything that’s come before. If there’s a Heroic Age banner on one of the books, we’re serious when we say ‘the Marvel Universe Starts Here!”

A new Age of Heroes dawns this May as THE HEROIC AGE begins and changes the face of comics as you know them! Join Brian Michael Bendis, Ed Brubaker, Jonathan Hickman, John Romita Jr, and more of the industry’s hottest creators as they bring a bold new era for the world’s greatest super heroes, with a stunning new look for the Marvel Universe!