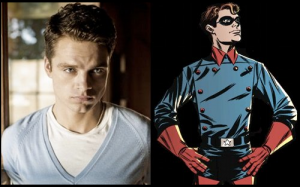 Today, the Hollywood Reporter broke word that Sebastian Stan – one of the actors who tested for the part of Captain America – has instead been cast as Bucky Barnes in director Joe Johnston’s “The First Avenger: Captain America.” As dedicated comic readers know, Barnes was “killed” in a flashback by Stan Lee and Jack Kirby after Steve Rogers was resurrected from a block of ice in “The Avengers” at the dawn of Marvel’s Avengers’ comics. However, over 40 years later writer Ed Brubaker returned Bucky to life as Soviet super assassin the Winter Solider who – after some crazy finagling with the cosmic cube and a robotic arm that helped him wield the shield.. took the mantle of Captain America.

While predictions on whether or not Stan’s Bucky will face a similar set of circumstances will have to wait until long after “The First Avenger” opens in theaters, the Hollywood Reporter claimed that the actor best known for a turn this season in the CW’s “Gossip Girl” and the recent “Hot Tub Time Machine” has signed on for at least five pictures.

Marvel would only confirm for the trade that Stan had been cast rather than reveal any other details. However, curiously the studio has still not released official word that actor Chris Evans has been cast in the movie’s lead role, even though the name has been widely circulated in all the Hollywood trades for weeks.