Sergio loves humor comics.  In 1966, he went to Europe.  He found many humor comics there and all of them were creator owned.  This was very different from North America.  At the time, the only humor comics in North America were underground comics.  The North American market was dominated by romance and superhero comics.  Also, Marvel and DC did not publish creator owned comics.  Neither company was interested in publishing a creator owned humor comic.  After many years, Sergio eventually found a home at Pacific Comics.  Pacific Comics became the first North American comic company to publish creator owned comics.  When Pacific went out of business, Sergio moved Groo over to Epic Comics.  Epic Comics was a Marvel Comics imprint that published creator own projects.  He later moved Groo to Image Comics.  He was thinking he would get more Groo fans there.  Unfortunately, that did not happen.  Not many Image readers tried Groo. 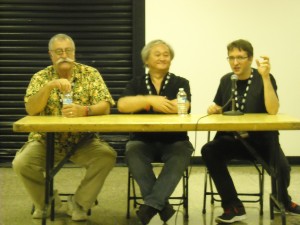 The moderator then opened the floor for audience questions.

The first question was how each of them starts a story.

When Stan gets an idea, he writes it down and then draws it out in thumbnails. The thumbnails are rough for Usagi stories since they are only for him.  For his Rocketeer work, the thumbnails had to be tighter because the editors reviewed at it.

Segio does the same as Stan.  He creates thumbnails and loose drawings for each story.  Stan does the lettering and he emails the panels to his colorist.  Sergio said that all stories should be totally finished before you start.

For Mad magazine, the editors email him a topic.  He comes up with 26 ideas to joke about the topic (from a to z).  The editors choose the best gags out of the 26 ideas and he draws them out.

Stan checks the pacing of his stories when he does his thumbnails.  In each issue of Usagi Yojimbo, there is a page for fan letters.  If he needs an extra page to complete his story, the letters page would be taken out from that issue.  Since Usagi is a creator owned comic, the publisher has no input into the story he writes.  Stan sends his editor, Diana Schutz, a completed story.  Sometimes, he cannot decide how to end a story.  When that happens, he writes two endings to the story and lets Diana choose the ending.

Sergio writes out the story before it is drawn so his stories are quite balanced.  Sometimes, if his story is short by a page, he would extend a battle scene.

Someone asked what their creative environment is like.  Do they have music in the background?

Stan needs peace and quiet to write.  When he draws, he either plays a DVD in the background or classic rock.

For Sergio, he also needs peace and quiet to write.   When he writes, he can continue until very early in the morning like 4:00 AM.  He lives in the country so he enjoys writing in his garden.  When he draws, he has the TV on or classical music.  He watches things he has already seen before.  By looking up every so often, it allows him to change his focus from his drawing to the TV.  He calls it “eye exercise.”   It gives him a break from staring at the drawing.  He also has a table and chair that is height adjustable.  It allows him to change his posture while drawing.  He currently has no physical health issues attributed to drawing.  He credits his good health to the constant change in posture while he is working.

Stan says he likes to alternate between single issue stories and multiple issue stories. He likes single issues because they are good jumping points for new readers of Usagi Yojimbo.  However, his longtime readers prefer the epic sagas.  He also tries to create single issues that lead to a larger storyline.  He stressed that each issue has its own narrative.

Sergio added to what Stan said.  He advised that you should write to the length of story. Don’t force extra issue.  If story is single issue, do not stretch it out.

Another audience member asked Stan if his inspiration for Usagi stories were from Japanese myths.  Stan replied that he actually uses Japanese culture as his inspiration.  He cited as an example ‘The Kite Story.’  He is currently drawing a story about soya sauce.

The final question was for Sergio.  Someone asked him to talk about the upcoming Groo and Conan crossover.  He said he was opposed to the idea of a crossover for years.  He viewed crossovers as simply merchandise to sell to fans.  Characters live in their own separate universes.  When he said yes to the project, it took him two years to come up with a story. They would never allow Conan to be defeated by Groo and he did not want Groo to be defeated by Conan.  He finally thought of a way to do it.  The story format would be similar to Akira Kurosawa’s Rashômon.  One version of the story will feature Conan and another version will feature Groo.