Pia Guerra was at the Montreal Comiccon this past weekend (Sept 17 and Sept 18).  I had a brief opportunity to chat with her after she completed a sketch for me. 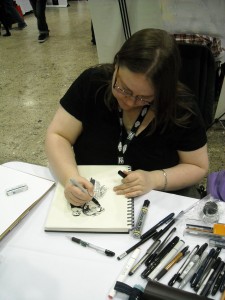 She is probably most known as the artist for Y the Last Man.  Ironically, because of Y the Last Man, she will never work on a long running series again.  When she signed up to be the artist for that series, she was young and did not know what she was getting into.  She thinks Brian K. Vaughan did not know what he was getting into either.  Each issue of Y took about 5 weeks for her to draw.  When the series was nearing its end, she was tired of the hectic drawing schedule and was happy to see the end in sight.  From now on, she plans to work on short stories and miniseries.  One interesting fact Pia said was that Brian had to completely map out the entire 60 issues of Y the Last Man before DC greenlighted the series.

I then asked her about Dr. Who.  Pia is a huge Dr. Who fan.  Her favourite Dr. Who is Tom Baker followed by David Tennant.  She also likes what Matt Smith is currently doing as the Doctor.  Because she was such a big fan, she drew a few issues of IDW’s Doctor Who: The Forgotten miniseries.