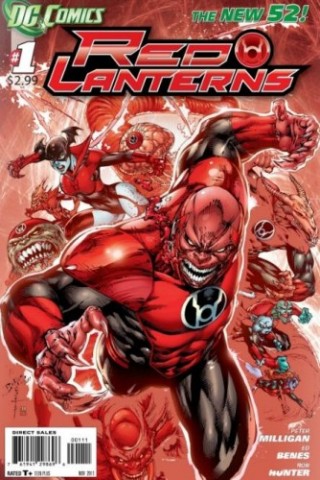 Fueled by their rage, Atrocitus and his Red Lantern Corps navigate the universe rectifying injustices to fill the void left in their hearts. Now spiraling out of the events of Blackest Night and the War of the Green Lanterns, Atrocitus and his corps are left to search for purpose in a universe that has caused them so much strife.

Deep in sector 666, a group of smugglers are torturing a male life-form as they notice a small furry creature flying directly towards them. Dex-Starr enters through the cargo hold and immediately attacks several of the smugglers, tearing one of their members’ scalps off before being subdued with electric prods and a collar. Atrocitus, who had been travelling with his kitty, takes exception to their handling of Dex-Starr and the male life-form, promptly killing each smuggler violently. As an elderly man is beaten viciously with a brick by an assailant on earth, the rest of the Red Lanterns tussle on Ysmault. After laying Dex-Starr down to rest, he orders his corps to desist, which Bleez laughs off as she walks away. Still lamenting for his unsatiated vengeance, left unfulfilled by Hal Jordan’s murder of Krona, a nearby pod bursts with hot red liquid and covers him. The unbearable pain forces him to remember the massacre of his people, the torment he felt as he watched his family die, or as he grasped his daughter’s doll as it slowly burned away. All that’s left is the pain. As the family of the elderly man visits their grandfather in the hospital, Atrocitus plunges his hand in Krona’s corpse and initiates a blood ritual to see into the future. He sees visions of people all across the galaxy being beaten, tortured, murdered, subjugated; these visions renew the fiery rage within him as the universe cries out for vengeance. He wonders though, if the Red Lanterns who followed him will still do so, and whether above all they still need him as Bleez appears to stage a revolt against him.

Although skeptical of giving the Red Lanterns their own series, I’ve very much become among the converted. Upon thought, these lanterns are the most interesting of the Corps, and have the most interesting thematic story available to it: rage is a dramatically viable driving force, but this book asks the question of what can sustain us once the object of our pain is removed from the equation. If that source of rage is removed, what is left? Atrocitus asks himself that very question as he contemplates his existence over the body of Krona, his sworn enemy. After admittedly going through the motions, we find the savage warrior questioning himself for the first time since his introduction as a character. What’s more, Atrocitus has always been set apart from the rest of his corps based solely on his ability to communicate rather than gurgle words in between bloody projectile vomits. Perhaps as the first Red Lantern and de facto leader, he’s also been fueled by his rage the longest, therefore expanding the possibility of it burning out as a motivator. What we find in this story is one which explores rage as an emotion and what it means for us as human beings as a driving force in our actions. The series seems to effectively be primed to ask, what purpose do we have when our pain-driven rage dissipates? Milligan’s plot has the potential to be a very interesting story which will add a new dimension to the Lantern corps mythology.

The tone of Benes’ artwork nicely captured the brutality inherent in the demeanor of the Red Lanterns, especially within Atrocitus as he tears apart the smugglers and again during the ritual pages where he plunges his hand into the corpse of Krona and initiates one of his prophetic blood rituals. Although the first page is a little weak, Benes scarcely lets up with his great contributions to the series’ first issue, from the two-page spread featuring Dex-Starr near the beginning, to the aforementioned scene in the smuggler ship where Atrocitus and Dex-Starr tear apart the crew, to again, the blood ritual; all of it encapsulates what the Red Lanterns are about, creating a working dichotomous dynamic between Milligan’s script and Benes artwork. Aside from those mentioned, there was another semi-touching scene once Atrocitus arrives on the smuggler ship where he simply asks what they are doing to his cat as electric sparks fly from the damaged equipment, his clawed hands clasped around the ship’s rubble. Combined with the his other contributions in the issue, it’s the panels where Atrocitus and Dex-Starr share panel-time where we see yet another dimension to the character. We see an undeniable level of tenderness that Atrocitus shows towards his kitty, both in how he protects it, carries it, and lays it down on a slab of rock to rest his injuries. It nicely contrasts the more violent work in the issue, even echoing the more emotional, heart-driven moments of the text.

This was a surprising issue, although one I don’t think will find a place outside of the Green Lantern fan base. I feel like that’s where the readership will primarily come from. Even still, the issue was arranged in a way where its story simultaneously provided an engaging story for older readers while also providing enough recap through its flashback sequences to engage readers who perhaps passed the issue in stores and found the cover to be interesting. I really feel like Milligan and Benes make for a remarkable team, their work nicely complementing each others, offering two dynamics of the experience which effectively tells the same story. Benes’ work for the most part hones in on the more aggressive, violent qualities of what a Red Lanterns comic should be about, while Milligan’s script, notably Atrocitus’ narrative throughout the issue, demonstrates the emptiness in the wake of violence accomplished. Altogether this was a very good issue, albeit without crossover appeal, and should be able to find its place in the Green Lantern mythology. Even still, I question the longevity of the series and its potential to tell fresh, engaging stories in the long term.