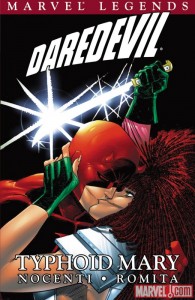 Fox has re-opened the Daredevil franchise by acquiring Twilight Saga Eclipse director David Slade. Much like the Fantastic Four, the Marvel Man Without Fear will be re-booted for a new series of movies (hopefully) in the near future. Currently Fox has the rights to the character and has been in development over the years according to Variety Magazine. If the development had stopped, the film rights to the character would have returned to Marvel Studios (now owned by Disney).

Although Daredevil isn’t considered a first tier character, such as Spider-Man or Wolverine, it has had some minor success over the years. (And yes, I DO have to include the Affleck movie from 2003. Most fans enjoyed the director’s cut on dvd more than the theatrical release).

Created by Bill Everett and Stan Lee in 1964, Daredevil has had some fantastic runs during it’s almost 50 year run. Most notably are the Frank Miller story lines. Of course everyone always talks about those, so instead I encourage Daredevil fans to also take a look at the John Romita JR,  Ann Nocenti , and Al Williamson Typhoid Mary and Mephisto  runs.

Let’s hope that the new Daredevil movie will bring fresh life into a character that has already suffered enough.