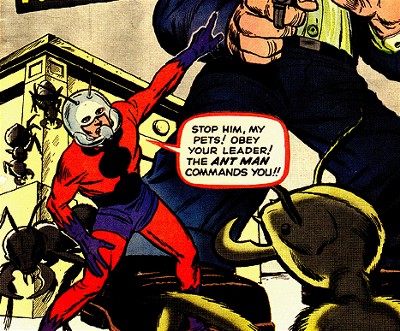 Entertainment Weekly mention somewhat in their Marvel/Disney coverage, that “Pixar is said to already be eyeballing an Ant-Man movie.”

As cool as that is – I mean let’s be honest – most people immediately thought  “oh wow, how cool would a Pixar Marvel movie be” when they first heard the news of Marvel/Disney merger – but this news makes me wonder what this means for the Ant Man movie in development by Edgar “Shawn of the Dead” Wright.

Wright described his take: “It’s going to be less overtly comedic than anything else I’ve ever done. It’s more of a full-on action adventure sci-fi film but with a comedic element – in the same spirit of a lot of escapist fare like that. It’s certainly not a superhero spoof or pastiche and it certainly isn’t a sort of Honey I Shrunk The Kids endeavour at all.”

So does this mean that Pixar would work from the Edgar Wright Jr and Joe Cornish script? Would Simon Pegg voice everyone’s favourite abusive husband? Or will they take it to a different direction?

Who knows, I guess it’s too soon to really hazard a guess, but not too soon to start spreading rumour mongering.

Pete DeCourcy is the Editor In Chief of ComicBookDaily.com and the manager of Blue Beetle Comics in Barrie, Ontario.

An Open Letter To DC Comics