Let’s be honest – it’s hard to write a good Justice League book. Grant Morrison and Mark Waid were maybe the last time anyone wrote them to the level they should be written. Morrison and Waid had them fighting off Angels, Anti-Gods, Killer Suns from the year 3000 and opposite dopplegangers.

While JLA as a title probably sells okay, critically it really isn’t anywhere where it should be. And why not? When you’ve got a book starring Batman, Superman, Flash, Green Lantern, Wonder Woman and a bunch of b-list to c-list superhero pet characters you should be able to do some pretty magnificient stuff.

But unfortunately, as we’ve all learned from Dwayne McDuffie (who was responsible for some of the best iterations of the JLA in the award winning cartoons; Justice League and Justice League Unlimited) who was fired from the title; when Lying in the Gutters collected some of his posts detailing his issues with getting his own storylines across, here’s a sample:

“DC is giving the fans what they want, and that’s big event books that have affect the entire line, and promotable events in the main solo titles. When that stuff stops selling better than regular comics, DC will stop doing them. Until and unless, JLA’s going to have to adapt to the times. When this version of JLA launched, it was in a continuity bubble that left it free and clear of the continuity in other titles. As soon as it synched back up with the rest of the universe, we had to pay the tab for that freedom.”

“…I do get frustrated, but it comes with the job. The nature of monthly comics has changed drastically over the past 20 years. JLA used to be THE place to go to see the big guns together, dealing with the gravest threats in the DCU. Now there are several big event crossovers a year, and those titles are where the huge stories happen. So I have to tell stories that feed into and come out of those events. I’d prefer if, as on Justice League Unlimited, I could tell stories that were at the center of the characters lives, but that was a very different circumstance. JLA the comic is part of a larger patchwork, and my mandate is to support the bigger story of the DCU.“

So with that in mind, take a look at what appears to be the new JLA line-up. (This is from an ad from yesterday’s Blackest Night #3) 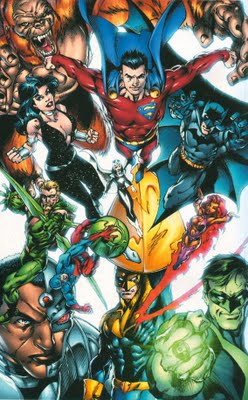 The series to be written by James Robinson and drawn by Mark Bagley*  appears to have a very… ecletic mix of characters:  Donna Troy, Mon El, Dr Light, Dick Grayon Batman, Green Lantern, Cyborg, Hal Jordan, Starfire, The Atom and The Guardian.

So who thinks that the big theme will be “Graduation”? I mean this is really more of a Titans line up than anything else – with Hal and Ollie standing in as those creepy dudes who came back to High School blaring The Chronic from their Mom’s Nova two years after they’ve graduated.

It’s an interesting idea – one it seems DC has been toying with for a while, but I don’t know how much it’ll work. The concept of the legacy hero is one that ages characters and DC seems to have to Crisis it up every couple of years just to keep characters young and not burdened by continuity.  And that’s really what this book is going to be about.

I like Robinson as a writer – and he’s done wonderful things with continuity and legacy in the pages of Starman (a series which has basically become the blueprint to the DCU mentality) but his run on JLA: Cry for Justice has left me cold. I’m willing to read anything he’s done – he’s earned that much from me – so I am excited to see what he’s got up his sleeve for JLA. I just hope that the higher ups will give him more leeway than they did with the equally talented McDuffie.

Please send me your thoughts at [email protected]

*I can’t be the only one who still feels wierd when he sees Bagley draw DC characters – it’s not bad,he’s a great artist – it just feels like seeing your cousin in lingerie or something.. it’s just very off.