It’s a brand new year for everyone out there and that means we have an entire year’s worth of cool comic stuff to look forward to. Pete’s got a fairly complete list stuff of the best stuff coming in in 2010 but I can’t let him have all of the limelight. So to steal his thunder, here’s my own semi-complete list of stuff I am really looking forward to in 2010!

How can anyone not be looking forward to this thing? You know what the best part of sequels to superhero movies are? You’ve got the origins out of the way already, that means you can dive right into the action. As cool as it is to see origin scenes of your favourite heroes on the big screen, I’m always “come on! let’s get going!” This trailer looks fantastic, we’ve got the world knowing that he’s Iron Man and so he has models dancing in Iron Man themed undies and a War Machine-Iron Man team up with them blasting the crap out of stuff. Superman film makers should take a page from Favreau’s book and show the titular character actually throwing a punch or blowing stuff up with beams.

While not as bad as Kevin Smith’s run on Spider-Man/Black Cat and Planetary, this series has somehow managed to get an entire movie in the can before the comic series has even finished! Don’t know what this says about Mark Millar’s priorities, but I was hooked on this series from its very first issue. That’s right, I was there from the beginning even before word of mouth made it super-popular, go me! 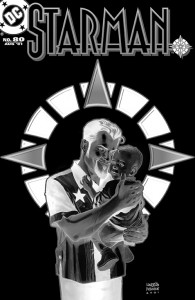 Ok, I may be a little biased here because I’m such a huge Starman fan but this was one of the best series ever, period! I mean check out the solicitation:

James Robinson revives his beloved STARMAN series for one more issue as a Black Lantern Starman haunts Opal City. Which Starman has returned and who can stop him from wreaking havoc on the city? Well, the Shade would rather just continue his date with Hope O’Dare, but if no one else can be bothered, what choice does he have but to investigate? Just don’t dare call him a Super Hero.
As the rest of the DC Universe is learning, defeating Black Lanterns isn’t easy – is this the final curtain call for the immortal Shade? Find out in another of this month’s one-issue revivals of classic DC Universe titles!

The Shade on a date with Hope? Yes, I wanna see this happ- ok, I admit this issue is probably for all the die-hard Starman fans out there, but I am one so leave me alone! 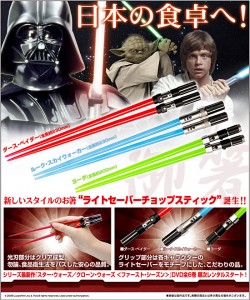 This is for all of you Jedi out there! These chopsticks are by Kotobukiya and should be hitting your local comic store really soon. You honestly can’t go wrong with these. Cool lightsaber thing? check. Practical food utenstil? check. The amazed stares you will draw when you pull these out of your pocket at your local sushi place? Oh yeah.

Well, that’s my list of stuff I really want in 2010. Check back when I think of more stuff I could use.

David Diep is a News Editor at ComicBookDaily and an assistant manager at Big B Comics in Hamilton, Ontario. He is also known to fight lions, tigers, bears and sometimes the oh mys in his spare time.