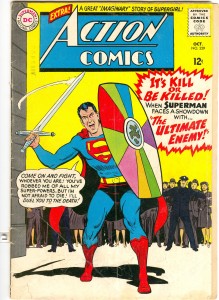 The Cover: Superman’s about to get medieval on your ass! Well, according to this cover anyways. He’s about to walk into certain doom against some unknown foe wielding a sword and…a rainbow colored shield? Check out the onlookers too, it’s almost like they’re living in Rome where everyday they get to watch some weird gladiator fights to the death starring Superman. Kill or be killed though? When did Superman decide to abandon his oath to not kill people? Or did he ever really explicitly state that he has one and we just assumed he has one like Batman. Whatever the case, check out that gung-ho expression on his face when he realizes he gets to kill someone.

The Story: Not really bothering with a huge set up or anything, our story immediately kicks off with a medieval suit of armor walking around Metropolis wrecking it. The armor makes a beeline toward the bank where it begins using its sword to cut into the vault. A patrolling Superman notices the commotion and swoops on in to stop the robber when the robber takes a swing at him with its sword and manages to cut through Superman’s “indestructible” costume. The suit of armor follows up with a punch that knocks Superman into a nearby building and proceeds to somehow escape Superman who stays behind to fix all the damaged buildings. Flying off to find the knight again, Superman finds the knight holding onto one end of a train filled with gold pulling on it to stop it. Using his Super-ingenuity, Superman decides that the smartest course of action is not to attack the knight while he is distracted, but to grab onto the other end of the train and have a tug of war with the train? Predictably, the train breaks apart and the knight proceeds throw Superman from the outskirts of the city into the city itself where he almost crushes some people.

Returning to his Fortress of Solitude, Superman seemingly has a mental breakdown and busts out a sword and rainbow shield of his own and walks around Metropolis screaming out a challenge for a duel to the death against the knight. Apparently, the rainbow design on Superman’s shield happens to be the flag of Krypton which says something about the Kryptonians but I’m not quite sure what…

Superman finally spots his foe near the docks and after declaring that that even though his Super-powers don’t work against the knight, he’s not afraid to fight him! Wait, how do you know your Super-powers don’t work against him? You haven’t tried to melt him with heat vision, freeze him with arctic breath or even just drop a big rock in him. I guess Superman thought his only real Super-power was winning tug of war contests with trains. So during this little scuffle, the knight and Superman fall into the water after which only the knight surfaces.

Readily assuming that Superman has died, everyone proceeds to flee as the knight makes its trek deep into the hidden lab of renegade scientist; Jon Smatten. Revealing that the knight is a robot created by him, Smatten decides now would be a good time to begin recording his memoirs and starts to dictate about how much he hates Superman. A hatred that stems from his time as Superboy when he found a bomb planted by his young self at reform school to the various times as Superman he foiled his schemes. Ironically, instead of using his inventions to steal petty items for money, he could have just patented his junk and made millions. Ahh, common sense, the enemy of every comic book villain. So anyways, at some point Smatten created a decide that would locate debris from Krypton and came across some wreckage of Kryptonian metal complete with instructions on how to shape it using a “de-coherer”. Of course, the instructions were in “Kryptonese” since the writer of this issue forgot that the people of Krypton speak “Kryptonian” so he made sure to steal some language deciphering documents. At this point, Superman bursts right out of the suit of armor, startling Smatten who can’t figure out how Superman managed to beat the knight. Superman’s explanation is that he knew that the knight and his sword were of Kryptonian due to his microscopic vision, so he built his own “de-coherer” ray and used it on the knight while underwater. And now using Smatten’s own recorded testimony, takes him into custody and proceeds to steal the knight’s sword for his very own use!

The Score: 10/10: Our highest score yet! The cover happens exactly the same way it does inside the comic with very similar art. Even the context is right in place! This is a first in ComicBookDaily history!