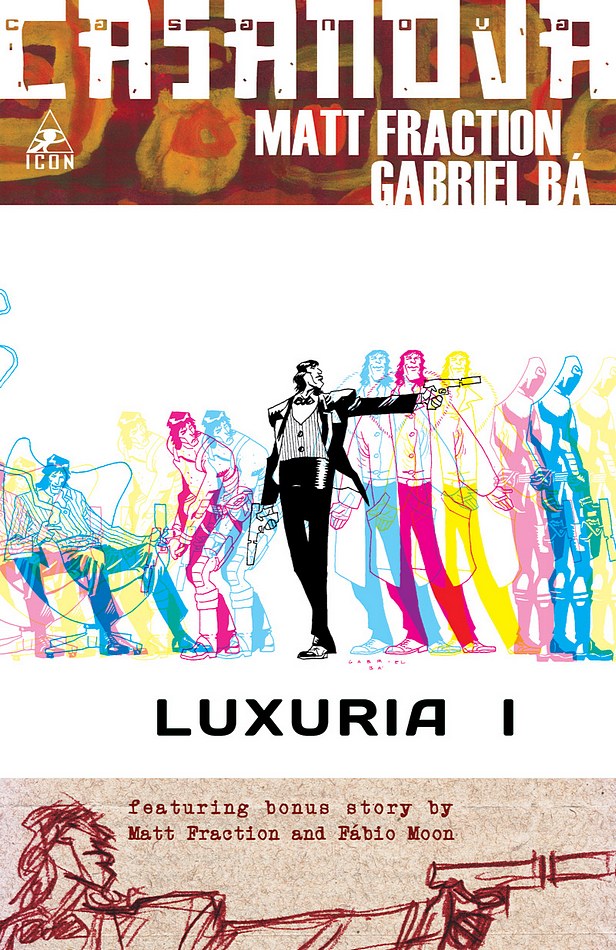 Starting this summer, my beloved CASANOVA (by Matt Fraction and the Brothers Ba & Moon) will be returning to the comic book world. My heart sings.

It’s being published by Marvel under their “Icon” line rather than Image—which means that the first two story arcs will be reprinted through Icon before we get even one brand new issue. It better be fast, I’ll tell you that.

I cannot deal with waiting so much longer for a CASANOVA story.

What’s a little disheartening is the recoloring. I was a huge fan of the spot coloring and it aided in giving volume two one of it’s effective moments when they flashbacked to volume one and it’s green color scheme.

For those of you who aren’t familiar with Casanova

b. It’s cool, I’ll fill you in – but to explain this series is next to impossible – as it is so dense and filled with vibrancy that reading it is an experience onto itself.

But here’s the easy way to explain it:

Casanova Quinn is the super-thief son of a Nick Fury type character who is stolen from his timeline by a bandaged evil genius to help him cause havok. It’s also about sex, drugs and rock ‘n’ roll. The rest you need to gather for yourself, it’s quite the ride.

Fraction will kick off that move by re-issuing the first two arcs of the series, originally printed in only one color, in full color, something he and his collaborators always intended.

“We wanted to sort of re-master the book as it stands and re-release and re-introduce it to the world, and Icon was a great platform for that as well,” remarks the writer. “There will [also] be some additional bonus material, different than [in the first volume]. But it’ll be in full dress, in full color, in full size. Done in two four-issue arcs to get everybody up to speed, because quite frankly retailers and readers alike ignored the book [due to] the format [as] it was 16 pages and one color. It had a lot of trouble finding its place in the world. I think anybody who looks at [the color art] will agree it looks phenomenal.”