When I was – god.. let’s just say younger ..I happened upon a Swamp Thing cartoon. At the time I thought it was all kinds of awesome. I mean, I had no idea who Swamp Thing was – not really – and this cartoon was essentially about a guy covered in moss who could do stuff like stretch his arm, make his body turn all spikey and control trees fighting against (what I thought) was a vampire, frankensteins and werewolves.

Here’s the intro to the cartoon if you have no idea or through morbid curiosity want to know what a 7 year old Pete thought was cool.

Either way, this to me was awesome. As someone who ran home after the first ten minutes of Beetlejuice this was the closest i’d probably ever get to horror.

So, thinking I was safe I took my allowance and my bike and went to the local comic book store.

when I asked the shop-keep where the Swamp Thing comics were, he smiled strangely and pointed me towards the back issues. They all smelt like cigarettes and homelessness and I dived in looking for a cool cover.

That’s when I found one: 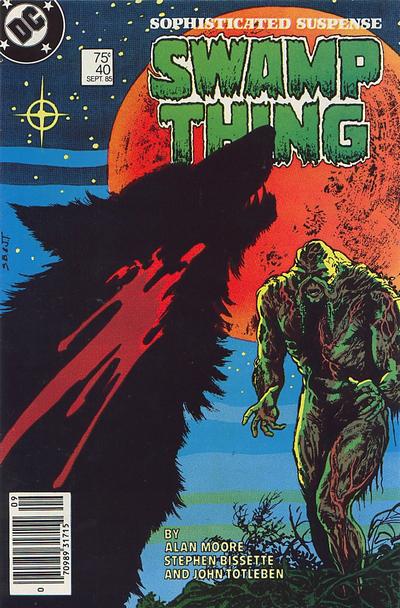 Sweet. Swamp Thing would be fighting against a werewolf. I can do that.

I paid the money and biked home. I popped off the foulest smelling plastic and then dove right in. What I got scared me and shook me far more deeply than the first ten minutes of Beetlejuice.

There is something very offputting and eerie about the art of Steven Bissette and John Totleben. Pages aren’t laid out so much as smashed, dripped and chiseled into place. Dialogue and word balloons were… well, it was hard to comprehend. I mean, up to this point the only real comic I’ve ever read were Super Mario Brothers issues and copies of Tintin, Lucky Luke and Spirou that I borrowed from the library.

I mean, this would be the equivalent to having Gershwin open for the Clash.

Any rules that my mind had formed for comics were destroyed and crippled by this one issue.

Alan Moore’s script – which was essentially comparing menstrual cycles to lycanism was brilliant and far too deep for me. I don’t think I really got what was going on. I just know that scenes like this – 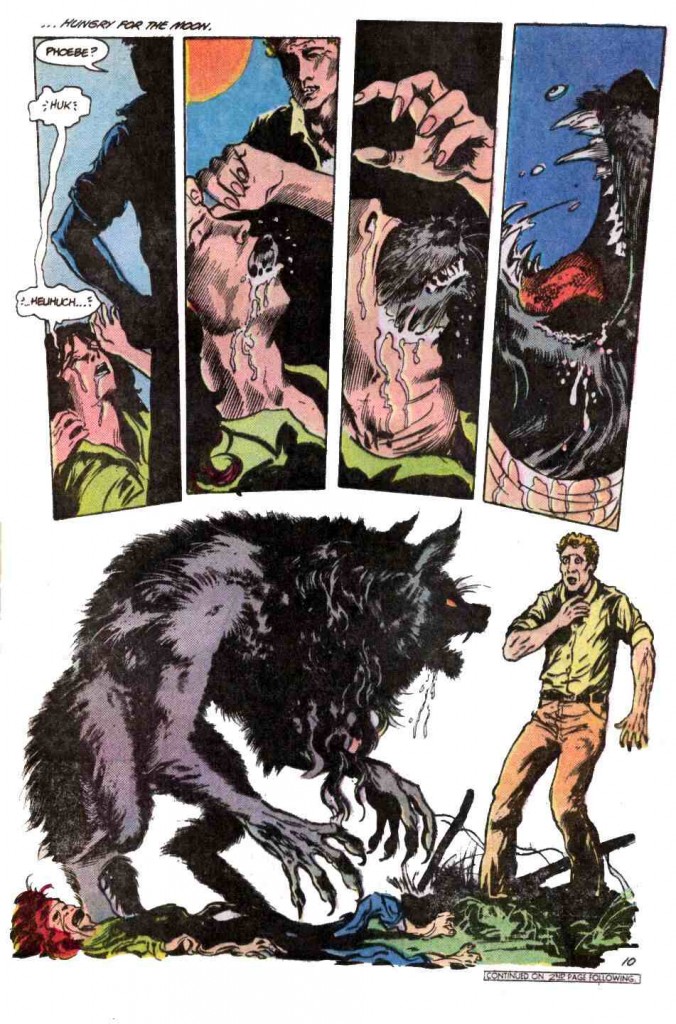 shaped images that would haunt me.

To this day, I try to read the Alan Moore Swamp Thing run once a year, every year I find someone new to love in it, but I still frightens me.

If you’re interested in learning more about ol’ Swampy you can check out his biggest fan – Mike Sterling – or you can go to the Hooded Utilitarian‘s round table discussion on the series.