I was 8 when my grandfather showed me Danger: Diabolik.

To this day I still have no idea why he showed me it. It was pretty out there. Very 60s. Filled with crazy cuts, zooms and of course garish colours.

That said it was all kinds of awesome to my 8 year old self.

For those of you unfamiliar with Diabolik, it’s a European comic about a ruthless master thief who steals from the Italian government and whoever else he feels deserves it. He’s helped by his sexy assistant Eva who may or may not be his girlfriend.

Unfortunately details are a bit vague to me, and Diabolik’s comic work has never been released in our wonderful continent. Fortunately he has somewhat become part of the genetic make up of some writers and artists. Matt Fraction lists his as a major influence on Casanova in terms of tone and the fact that “his heroes all wear suits.” Grant Morrison just straight up ripped off the character when he created Fantomex for his New X-Men run. Even going as far as to name his ship E.V.A.

And now superstar artist in the making – SHIELD’S Dustin Weaver – has this wonderful sketch: 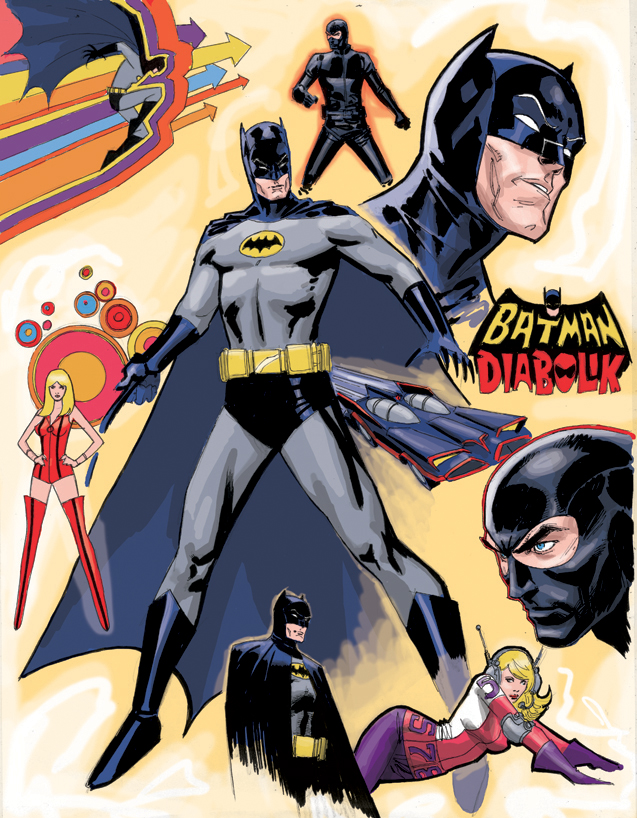 Weaver had this to say on his blog: “Here’s a page from the ol’ sketch book that I decided to through some quick colors on. I think it would be cool to do a crossover between Batman and the Italian comic character Diabolik and set it in the 60’s. I’ve never read a Diabolik comic so my idea of him is completely based off the movie Danger Diabolik. He seems to me to be a lot like Batman, but he’s a bad guy, and his sidekick is his hot girlfriend, Eva. I would want Batman to be a “cool version” of the Adam West Batman. Think the Adam West kind of look with an animated series kind of attitude.

Another DC comic, European comic crossover that will never happen, but that I think would be really cool: Superman-Metabaron”

This would be an ideal way for DC to introduce Diabolik to a new audience, unfortunately this seems like the sort of territory that DC no longer cares about. Luckily we’ve got companies like IDW and Dark Horse out there who just may hear the cry.