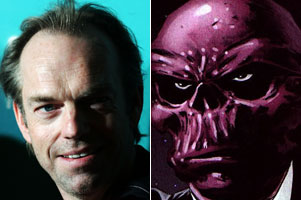 Hugo Weaving has sort of carved out a niche for himself playing the most despicable characters. Agent Smith in the Matrix, That giant Robot with teeth in Transformers and, uh, Noah in Happy Feet?

Alright, so I’m really only familiar with two of his roles as bad guy.

But the once and future Elrond is apparently this close to signing on to play The Red Skull.

While this ruins my prediction that Colm Feore would be Johann Shmidt, I’m okay with it since Weaving is an amazing actor, and who knows, maybe he’ll give us a truly scary Red Skull.

I mean, I’ve always seen the Red Skull as being the boogey man story that German Jews would tell each other to scare each other. There is no redeemable characteristics with the Red Skull.

I think we’ll probably be hearing more about this later on today… and maybe even some Cap casting..