According to Superrobotmayhem.com, artist Adi Granov made an image of the Marvel Monster available for director Jon Favreau as a billboard Iron Man will fly past in the film.

“This was my design for Fin Fang Foom for the Iron Man Viva Las Vegas book I was doing with Jon Favreau. But this image in particular was done for the IM movie and used as a billboard in one of the scenes where Iron Man flies past it. It’s very quick, but Jon wanted to have a kind of a cool easter egg in there.” 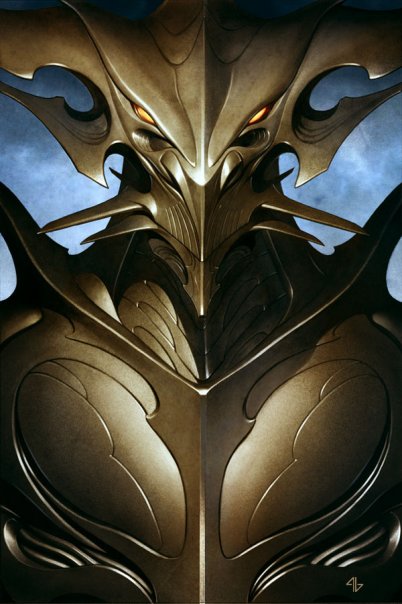 For those of you who aren’t familiar with Fing Fang Foom, then I pity you. Ol’ Foomy is one of those Marvel Supervillains that’s equal parts of Godzilla and equal parts really dumb idea. Which isn’t to say that there haven’t been any great Fing Fang Foom stories – read Warren Ellis and Stuart Immonen’s Nextwave as an example of the pure brilliance of comic books – but he’s a character that’s very odd and a hard fit for the new and improved Marvel Universe. (Yes, I’m aware that this is a world where Punisher can be sliced to pieces and be brought back to life as a Frankenstein monster by Man Thing – but do you think any of the BIG MARVEL WRITERS are clamouring to try to update a dark Fing Fang Foom*?

FFF debuted in the Silver Age of Comic Books, appearing during Marvel’s period of experimentation with monsters, being intregrated into the Marvel Universe in Iron Man where it revealed in flashback that the character is an alien being from the world of Kakaranathara (also known as Maklu IV) in the Maklu system of the Greater Magellanic Cloud. The alien and several other members of his race originally depart from their peaceful homeworld with the intention of conquering other planets. The alien dragons land on Earth in ancient China, and the crew used their natural shapeshifting powers to mimic human form, intent on entering and studying human society before beginning their conquest.

So what do you think? Maybe Iron Man 3 will start with Iron Man drunkenly fighting what he thinks is a Giant Lizard in Purple Pants… that is in reality just a piece of complex machinery?

Dude, why don’t I write this film?

*well, Jeff Parker could.. but then you’d have to have actually read Agents of Atlas.. and unfortunately we know you didn’t.