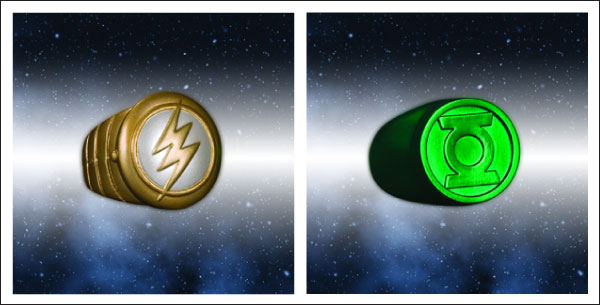 Seemingly bolstered by the success of its Blackest Night promotion, and undeterred Marvel’s PRO-SIEGE/ANTI-BLACKEST NIGHT stunts DC Comics is making another ring offer. This time, though, the focus is on the publisher’s next big event, Brightest Day.

We can’t promise it’ll make you any faster, or that it’ll respond to your willpower, but hey — that’s what our imaginations are for.

But we can promise a way for you to get your hands on one. With BRIGHTEST DAY banner issues THE FLASH #1 and GREEN LANTERN #53 soliciting in the February issue of PREVIEWS, DC Comics is offering promotional FLASH and GREEN LANTERN rings to qualifying retailers.

Cool, right? “But Alex, how do I qualify?” Good question:

Retailers will be getting more details on the promotion later today.

We swung by our very own Dan DiDio’s office to get his thoughts on the incentive, and he was happy to share.

“These rings are not only very cool, but they’re a big thank-you to our fans, who’ve helped make BLACKEST NIGHT a huge success. We’re hoping we can all keep the momentum going once the BLACKEST NIGHT ends and the BRIGHTEST DAY begins.”

Thanks, Dan! But there’s more. We gave Geoff Johns a quick call to get his thoughts. Geoff?

“One of the many great Flash Facts about DC Comics is that they actually do support the retailers with promotions like this that not only make our whole business a bit more fun, but also bring the promotion to every single reader. Of course, the proof is in the content and I couldn’t be prouder of the work Francis Manapul and I are doing on THE FLASH and Doug Mahnke and I are creating on GREEN LANTERN. Thanks to everyone, retailers and readers, for an amazing 2009 and here’s to an even better 2010!”