Welcome to the first installment of a new weekly ComicBookDaily feature called “Why are we thinking of this?” In this feature, we look at all sorts of stupid comic book questions and theories about our favourite characters and try to figure out just why we’re talking about this.

How do Wolverine’s regeneration powers manage to defy all laws of biology?

Wolverine fans know all about his vaunted powers of regeneration. He’s managed to regenerate himself completely from pieces of flesh dangling from a bare metal skeleton, as seen in his encounter with Nitro in the aftermath of Civil War. He got blasted to a metal skeleton and then regenerated. That raises the question of where does the matter that makes up his body come from? Human bodies grow by breaking down material we ingest and use it to create cells, but the sheer amount of matter needed by Wolverine to recreate his body simply is not there. His bare metal skeleton has not taken in any nutrients for cellular growth, he is literally making something from nothing. When Wolverine got blasted into a skeleton, did he fall on a Big Mac and turn it into a bunch of cells? Oh and let’s not forget about his ability to cure world hunger too. Since we have established he is creating essentially “meat” in a matter of minutes, you could have like Emma Frost block out his pain receptors, cut pieces off of him, feed some people and let him regenerate the pieces. Rinse and repeat. Man, Wolverine is a dick.

Why do comic books never address the issue of having to use the bathroom during the middle of a fight? 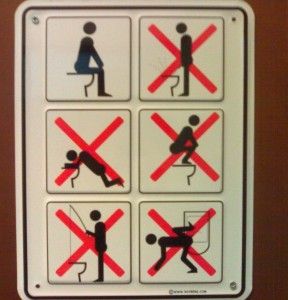 I don’t know about you, but I sometimes have the need to empty my body of waste products. Given all the action superheroes see, why have we never seen a panel where say Spider-Man calls out a timeout to Doc Ock so that he can quickly drain the lizard? Or Wolverine stops his fight with Sabretooth as that Thai food he had is doing a number on his stomach? Sure it’s a waste of comic space but damnit I want to see it addressed at least once! I need to ask Bendis to address this.

Can Wolverine get a STD?

Now now, hear me out on this. Wolverine has superfast regeneration, right? So presumably his body resists the effects of diseases OR he just goes through them superquick. If it’s the latter, does that he mean he can get herpes and then it just plays out really quick like a film on fast forward? And if any of this is true, that means Wolverine holds the cure to EVERY malady on the planet. Which also means that instead of studying Wolverine to help people, they think it’s a better use of him to cut up robots with sharp claws. You’ve got brilliant minds like Xavier and Beast who instead of harnessing this power for the betterment of everyone, spend their time figuring out how to keep an island from flipping sinking? Hell, ask any engineering graduate and they can probably tell you. You have people with powers to move mountains and you can’t make an island float?

David Diep is a news editor at ComicBookDaily, an assistant manager at Big B Comics in Hamilton, Ontario and a part-time loot ninja in World of Warcraft.