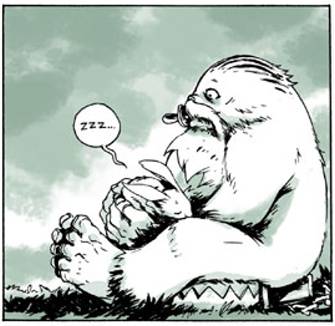 Karl Kerschl is one of the most in-demand artists working in comics right now. From his work on Superman with Greg Rucka to the critically and fan acclaimed Flash installments in the Wednesday Comics Project. However his heart seems to lie with his Transmission X webcomic The Abominable Charles Christopher.

Shawn Young: I tried to explain The Abominable Charles Christopher in a single sentence and found it near impossible, what was the inspiration for this ambitious story?

Karl Kerschl: Oh God! The inspiration was from lots of different things. One of them is obviously Miyazaki’s stuff. I grew up with it and it was super inspirational. The other big ones are Calvin and Hobbes and Chuck Jones.

KK: Yeah, I just like the Chuck Jones brand of humour. For that particular script the inspiration was the old Walter Lantz Woody Woodpecker cartoons. Not in terms of themes, but the inception of the Charles Christopher story was as an animated series. It was something I came up with in the car when I was driving to work. I thought it would be interesting to do a children’s show that was a lot of quiet woodland scenes with a silent character surrounded by really obnoxious animals. So I started not knowing where I was going and not having any idea who the surrounding characters would be and it’s turned into what it is.

SY: I read in the introduction to the book that you imprinted the characters with pieces of your personality, are there recognizable traits of friends and family as well?

KK: Even the pieces of myself are not specific or direct, they’re just bits of my personality or bits of my life. It’s more tonal shifts you know? If I wake up one morning and I’m in a bad mood that strip might be a little sad. I didn’t expect that there would be so many sad moments and there are! There are lots of them. But I find working on those scenes from a storytelling standpoint to be more satisfying than doing the humour in a lot of ways. It satisfies some emotional need I must have. A lot of the comic is inspired by whatever music I’m listening to, especially since I don’t plan them ahead… a song will come on and it will generate some sort of imagery for something and I just have to work it into the comic. I think I must listen to a lot of melancholy music (chuckles) and it resonates in your chest.

SY: Is it a cathartic release to put it on page?

KK: I wish it was it’s actually, almost frustrating… the output is never as good as it was in your head. For example the ending of the first chapter, the ending of this particular book is a scene I worked up in my head for awhile. I was listening to Sigur Ros and it was months ahead of getting to that point in the story so I would listen to the music and it would bring back that imagery and I would get emotional, almost to the point of tears. But when I actually sat down, I was excited and it didn’t come out the way I intended it. I don’t know why? Partly because of the weekly format.

SY: Do you find the weekly strip difficult to convey your ideas? Is it constraining?

KK: I don’t find the weekly format restrictive. In fact it’s liberating. I’m used to working in the standard comic page format. There’s a lot more room on the page to tell a story and I view each page as a scene or a beat of time. The same way I view a strip, and in a strip I have to be very efficient.

SY: So the format of the strip has forced you to tighten your storytelling? 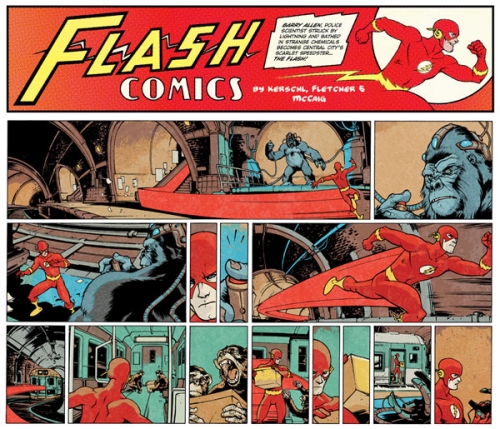 KK: Yeah a lot, I’ve learned a lot in just the couple of years since I’ve been doing the strip.

SY: Did you apply the same principles to your Flash story in Wednesday Comics?

KK: Absolutely, I couldn’t have predicted that. I first thought ‘ Wednesday Comics I’ll have a huge page to do a scene’ but then we split it up into two strips. And cutting out those longer beats goes against all of my instincts as a storyteller. But forcing myself to has taught me to be more efficient.

SY: Book One of The Abominable Charles Christopher collects the first year of the web-series..

SY: How far along are you in the story? Can we expect a second book in the near future?

KK: I’d love to people have been asking me especially here at TCAF ‘How many books will there be?’

I think probably three…. I think about stories in three acts. Just instinctively so I’m very aware that I’m working on a second act. Unfortunately second acts are very tough to write I would love to do a second book a year from now. It might be a bigger book.

SY: Will the second book collect the guest strips? 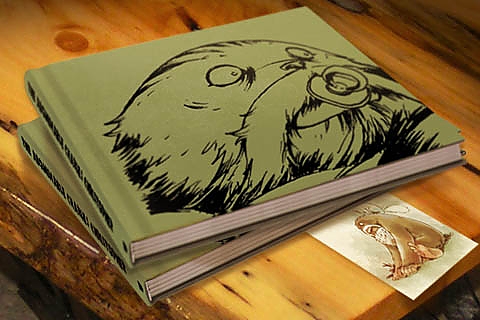 KK: Probably not I could have put them in this volume. I don’t want to put them in the book because I don’t want to profit from other artist’s free contributions to my strip. I love them, they will always be there online and if I can return the favour in anyway I will happily do so, but I won’t sell them to prints and I don’t want to collect them. Although I’m sure they would all be ok with it.

SY: In addition to Abominable Charles Christopher what else can we look forward to from you?

KK: I’d like to increase the frequency of this. I’ve got some work with DC. I’ve got a zombie book which will be out in October. It’s written by Peter Milligan which is not at all what you would expect from a zombie book. It’s different. And after that I’m working on a really big project with Cameron Stewart that I’m not supposed to talk about.

You can find The Abominable Charles Christopher weekly at www.abominable.cc and if you love the series as much as I do you can purchase Book One which is collected in a beautifully bound hardcover edition at www.store.txcomics.com