If you haven’t heard about Kill Shakespeare yet, it’s not from lack of buzz. Having had positive write ups from Wired, Bleeding Cool, Topless Robot and Comic Book Resources. Co-creators Conor McCreery & Anthony Del Col have crafted a wonderfully complex and exciting comic that cherry picks William Shakespeare’s greatest characters into one of the more original stories to come along in a very long time. It also doesn’t hurt to have Andy Belanger, one of the most exciting and gifted storytellers in comics, supplying the artwork of his career. The fact is the comic feels very much like imagination let loose, being confined only to the limits that the creators have placed themselves (let’s be honest no one wants to disrespect the bard by doing something completely out of character.)

We managed to get an interview with all three gentlemen after their panel at Wizard World Toronto.

Pete: The idea of the ‘shared universe’ is something that is very particular to comics. This is one of the first times that Shakespeare’s universe has been tackled in such as way. What are some of the inspirations that led to Kill Shakespeare?

Conor: When we first thought about the idea for this Kill Shakespeare thing it really did come as a videogame. We were sitting there, Kill Bill had come out, and we were joking around about mass multiplayer games. Anthony [Del Col] had said, “What about a Kill Bill but instead of David Carradine, it’s Billy Shakespeare?” So, we sat there and thought, “What if?” You know, why not? It would be really interesting if you saw Hamlet have to do battle with Romeo. What would that look like? And that type of mash-up idea.

And being a big fan of Fables – that just sort of got us going in terms of what is possible here. We probably spent about three…three and a half years working on the concept and working on it in terms of an idea, like how could we sell this to a publisher, before we really put pen to paper and started committing what this story was really about.

Conor: Well, the way we look at it now is that we want the twelve issue arc to be a story in and of itself. I think that the best stories are the ones that leave you to wonder. I think what really makes any story fantastic is when you can think about “what if,” what would happen next? So we do have an idea in our mind of what will happen next with these characters, but we don’t want to have the sort of story where it ends on a cliff-hanger, and if you couldn’t get/didn’t want, you wouldn’t have felt that you got a real story. This will be a full story – but, yeah definitely to us there are many more chapters to be told.

Pete: Shakespeare has often been referred to as a populist entertainer of his time, and comics have been considered a bastard art form. Is this an attempt to mainstream Shakespeare more than he already is?

Andy Belanger: To an extent, but I also think it’s a springboard for people who – you know they might be high school students and they’re being forced to read Romeo & Juliet, and they look at the book and they look at the language and they don’t understand it and don’t want to understand it. I think this is something that teachers could use as a springboard for that and, well, really anyone in general. Hopefully people read this and if they’re not familiar with Shakespeare it will get them interested in that.

Pete: In terms of story lines, did you guys make up a timeline of when and where characters would fit in?

Conor: It is a bit random, and we did put some thought into that, but it’s one of the things we didn’t want to be nailed down in. Our belief i

s that if Shakespeare created it, it belongs in this world. One of the things we kind of stayed away from was a lot of the historical plays – with the exception of Richard III.

Anthony and I had a discussion of Julius Caesar. Maybe he doesn’t fit in this main arc, but maybe somebody else would think, “I want to see Julius Caesar throwing down with Titus now that this is happening in kill Shakespeare!” But we didn’t work too hard because of a lot of it feels very organic.

Anthony: Yeah, a lot of it feels very organic. I mean, we thought or toyed with the idea of just throwing everyone in this land. With a lot of them, we used the back-story straight from the source, but we played around with others. For example Juliet has actually survived her ordeal with Romeo. It’s about seven or eight years later. She was actually resuscitated and brought back to life, which we don’t really think is too much of a stretch, because when you look at the play Romeo & Juliet there a

re lots of fantastical elements, such as the apothecary’s giving the potion that makes them appear to be dead for three days, that sort of thing.

So we play with their back-stories, but not everyone. Othello and Iago – we play with that. Romeo shows up, so yes he’s involved. But we’re very faithful and honest to the original version of the—

Andy B: Don’t bring attention to it!

Andy B: It feels to me to be darker and grittier with more violence, but similar in tone to Neverending Story. Like each of those characters felt like their own storybooks, right?

Andy B: It’s believable to see a Musketeer next to a Knight – it’s not a big stretch. 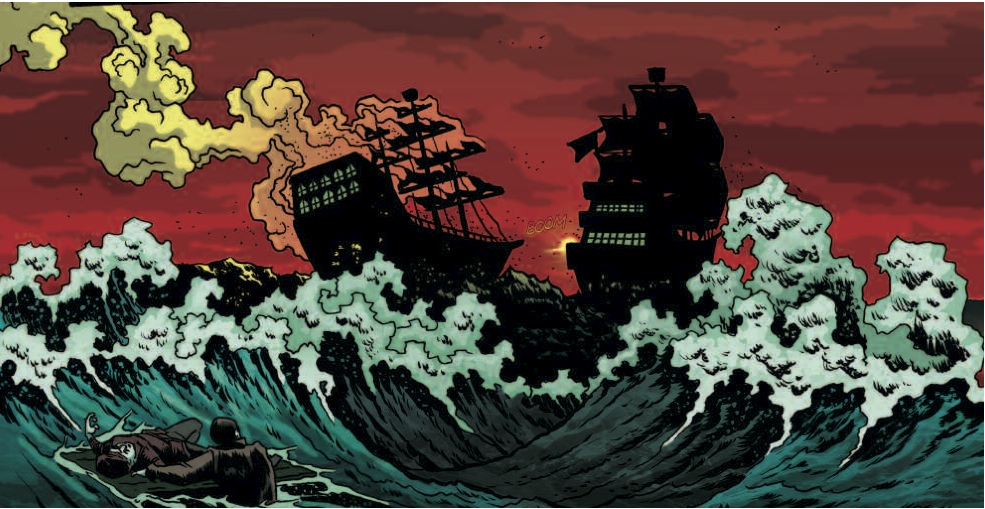 Pete: So I read the first issue and really enjoyed it. Actually – just a side note: the colouring is beautiful.

Pete: Andy, you’re known for your horror comics. Bottle of Awesome, Raising Hell and Friday the 13th. The first issue of the Kill Shakespeare has some beautiful fight sequences with the Pirates. Are you going to ramp up the violence to your typical level?

Andy B: Like Andy B’s hyper-violence? [laughs] You know what? I actually tried to rein it in, and they tell me to ramp it up.

Anthony: I think one of our defining mantras when we looked through the initial sketches was ‘more blood!’

Conor: But no viscera!

Andy B: I think you’re pretty much used to me seeing heads hacked off and blood everywhere and I’ve been trying to rein that in a bit, but they want more and more… 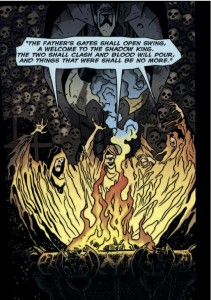 Conor: I think there’s that kind of stuff in there, but one of the things you find in issue two is that not all the characters are what they initially presented themselves in issue one. I think there’s a couple of moments after issue one where characters do some pretty horrific things to each other – but it’s not like it’s this slashing through. It’s more like one or two acts that – to me – are much more horrific because they’re very real. You can imagine that if – this happened to me – you’d be terrified. When Anthony and I were writing we wanted to have moments that we really haven’t seen, so when we handed it to Andy his horror sensibilities really made it so naturally creepy.

Andy B: There’s a scene in issue two that’s actually creepier – more twisted, more psychological – than anything Jason really does. Jason just runs around and hacks people up – but this is an actual psychological thing that happens and… [Anthony and Conor] are both looking at me right now saying don’t say anything!

Pete: It’s okay. I actually don’t want to get spoiled. It’s on my pull.

Andy B: Issue two is awesome, I was super happy when I was working on it. Issue one was really hard. It was like giving birth because I didn’t know how I was going to draw it. Getting use to which tools I was going to use on the job, going through everything in the book, from tech pens to pit pens. Now I’m using a paintbrush and it just work better. But issue two is where I figured everything out. So if you liked issue one, wait ’til you see issues two and three. Because they’re probably the best work I’ve done.

Pete: Awesome. Thanks for the interview, I cannot wait to get the rest of the issues and best of luck! Hopefully we can talk again once issue two ships!