We’re a stubborn lot I can tell you that much. As the selections got thinner and the reasons to leave got thicker the comments never waned, the daily visits stayed firm, we saw it through. Thanks for hanging in there with me, it was an informative and noble exercise.

I’m way too lazy to attempt this but it would be interesting to count up which artist won the most days? Neal Adams? Carmine Infantino? L.B. Cole? I have no idea but I’m sure these three were in the mix.

I thought today would be a fitting day to show what I was up against on a daily basis, I’m posting every cover that was available to me, there were 20 in total and I’ll pick them in the order I like them and I’ll try to give a quick critique of each.

I’m not sure how but I think I’ll do a few Covers posts in 2020, not a regular feature but something to build on this, there is so much to write about and discuss when it comes to comic book covers.

The day belongs to Carmine Infantino and his cover to Detective Comics #365, Joker covers always command attention and this one even more so.

Gene Colan is a master at unique perspectives and difficult angles.

Stan Goldberg gives us another great Pep Comics cover on issue #365. Those girls really did like their boys didn’t they!

Neal Adams has done so many great covers but I can’t count Adventure #365 as one of them, credit to the colorist on this one.

Love the underwater punch on Kieron Dwyer’s cover to Captain America #365, I didn’t even know who Kieron Dwyer was until this exercise, he’s a good artist.

John Romita gets credit for the cover of Amazing Spider-Man #365, let’s not pile on John, he’s left his mark on Spidey.

I wish Steve Epting did the foreground in the same format as the background on his cover to Avengers #365.

Ross Andru draws a cover to Action Comics #365 that you really want to open up and read.

Ed Hannigan has given us some stand out Batman covers so I’ll forgive him for his OK effort on Batman #365.

Walt Simonson delivers a battle cover for Hulk #365, the Hulk and the Thing might be responsible for the most “great” battle covers of all time!?

The Thing is one of the hardest Marvel characters to draw “right” but Paul Ryan does a great job on the cover to Fantastic Four #365.

Walt Simonson mailed in his cover to Thor #365 but we’ll forgive him because he gave us some great ones.

Brandon Peterson draws a pretty mean Colossal on the cover of X-Men #365.

The best part of Ross Andru’s Superman #365 cover is that outdated hairstyle on Supergirl.

Joe Kubert was a workhorse, this exercise gave me a new appreciation for his work.

Didn’t say! I did notice through this exercise that there are a lot of covers not credited to any artist. 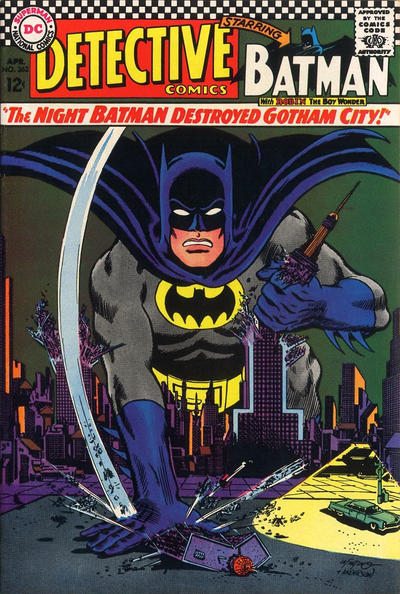