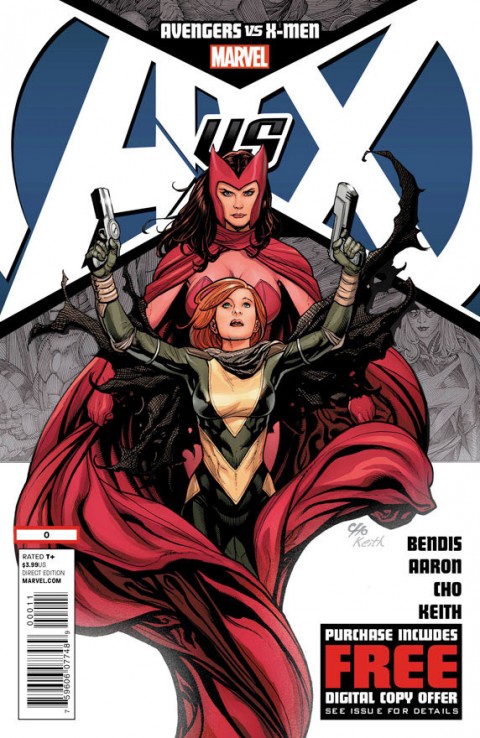 Since her birth in the Alaskan cold in the 2007 X-Men crossover Messiah Complex, Hope Summers has been the central figure in all mutant related stories. From her role in the latest Cable series which lead to her return to the present during Second Coming, Hope has been an integral player in Marvel’s plans for the X-books; she’s either destined to save the mutant race from extinction or to destroy the world. That wasn’t even the beginning of the complete story mind you, as the planning for this crossover stretches as far back as the 2005 mini-series House of  M which resulted in the mutant gene being wiped out by the Scarlet Witch.

The A vs. X prologue functions as the set-up to the big throw down between the Avengers and the X-Men fans have been clamouring for, all of which is centered around Hope. This book features two separate stories designed to formally introduce the uninitiated to the principal players in the story line; one penned by infamous Avengers architect Brian Bendis focusing on Scarlet Witch while current Wolverine and the X-Men writer Jason Aaron revisits Hope in his contribution.

Bendis brings the Scarlet Witch to the aid of a former A.I.M. agent who was being transported to a safe location after he had sold the organization out to the authorities. The transport vehicles are eventually attacked by an army of MODOK who become the source of tremendous carnage and disorder in the New York City streets. It’s Wanda’s arrival, who is later joined by Carol Danvers and Spider-Woman, that quickly ends the MODOK attack. After a brief reunion, the two Avengers convince Wanda to come with them to the Avengers mansion, a suggestion which proves poor as the trio are greeted by Vision as they approach the front entrance. After Vision berates Wanda’s past actions, Carol flies a crying and saddened Scarlet Witch away from the location of her former home.

The Scarlet Witch story functions as little more than a primer for the forthcoming crossover event. In that regard the book succeeded in re-acclimating readers to the character, at least for those not up to date with her recent appearances. In this we saw the Witch in action, using her powers to stop the MODOK attack thereby allowing us to gain a concrete understanding of what she is capable of in the Marvel Universe. The latter half of the issue shifts its tone, painting her very much as an Avengers outcast stemming from her actions in Disassembled and House of M. Bendis does a fantastic job of stripping down her character, making her a very sympathetic figure in the greater plot despite her demonization from the main players from both stories.

Where Scarlet Witch had hoped to gain acceptance from her former teammates, Hope wants nothing more than to step away from them and their expectations of her. Her story, written by Aaron, finds the young X-Man sneaking away from Utopia to fight thugs and villains in the San Francisco streets. Armed with her wits, weapons, a police radio and Cyclops’ jetpack, Hope begins to leave but is interrupted by the X-Men’s leader. After questioning him about the Phoenix, Scott earns an optic blast for his troubles before Hope takes off and leaves Utopia in search of trouble. She stumbles onto it in the form of the Serpent Society, whom she quickly subdues. Emma and Scott arrive and urge her to head home while they deal with the authorities. Hope returns to the mutant island to wash her hands of the accumulated blood from her encounter with the Society, looking up at the sky while the Phoenix Force moves ever closer to Earth.

Relative to Bendis’ contribution, Aaron’s Hope story didn’t have as much emotional drawing power. Hope’s tale didn’t particularly add elements to her character or to the A vs. X crossover that haven’t already been explored. Aaron’s Hope ultimately thought and acted identically to every other characterization of her since Second Coming. The key emotional moments for the character, such as the opening conversation between herself and Cyclops and her internal monologue prior to fighting the Serpent Society, feel rehashed and repetitiously serves no other purpose than to indicate Hope can take care of herself and that the Phoenix Force is coming for her. Hope’s story simply feels like a throwaway.

Despite the two different stories, they are unified by Frank Cho’s visuals which gives this prologue issue a measure of continuity despite the different writing styles employed by Aaron and Bendis. Cho’s work is the saving grace of the issue, anchored by truly fantastic pencil work. The depth of his skill is fully evident in the car crash page in the Scarlet Witch story. The scenery, beautifully coloured by Jason Keith, features three cars colliding at a 4-way intersection. The level of detail is mesmerizing, however it’s the blurring effect he uses on the black car around its wheels to indicate motion which affirms the quality of Cho’s technique. That same attention to detail is seen again at the conclusion of the Scarlet Witch story. After being turned away at the Avengers Mansion by Vision, the panels display an entire sequence focused on Vision turning his back on his wife and walking away as the Avengers question his decision. With the point-of-view shifting to inside the mansion from the street, we see Vision stoically walk past his teammates, only to shed tears for his wife once at a safe distance. The art accompanying Aaron’s work offers much of the same. There’s a nice series of panels at the end of the issue after Hope had fought the Serpent Society, where she removes her bloodied gloves, washes her hands and looks up to the sky, knowing solemnly that the Phoenix is coming for her. The point-of-view pulls further and further away from Utopia, until all we can see is the Earth, and then the galaxy with the Phoenix heading directly for the Milky Way. In a book which features more than one story, it’s hard to find synergy between two writers. To this end solid art is crucial and Marvel editorial couldn’t have picked a better person for this prologue to their big summer blockbuster.

As a complete package, the book left much to be desired. Although the art was fantastic, the two stories were precursors to the bigger story to help familiarize readers with the integral players. To this end Aaron and Bendis mostly succeeded, although the former’s story felt like a carbon copy of every book featuring Hope over the last year. Both had their moments, but neither are particularly important to understanding the forthcoming Avengers-X-Men crossover event. It’s a non-essential book, but for the collector in you it’s a good companion piece to broaden the scope of Hope’s place in the Marvel Universe.