“One of a set of explicit or understood regulations or principles governing conduct within a particular activity or sphere.”

That is the definition of the word rules.

When I collect comic books and action figures, I follow a set of rules as well.  These rules can be changed at times, but I try to follow them closely.

For me, the idea of rules of collecting started in 2009.  I was at the Canadian G.I. Joe Collection when I overheard a vendor say “Every Crystal Ball is mine!”.

Crystal Ball is a G.I. Joe figure, who was a Cobra Hypnotist.  In the 80’s when the figure came out, it was crazy idea and the character wasn’t very popular.  But there are fans of that figure.  This vendor was clearly a fan of Crystal Ball.  Convention-goers would stop by his table, and this vendor would trade a figure for any Crystal Ball.

My wife was fascinated with the idea of collecting just one figure.  She then started her search to find just “one” Crystal Ball.  It was tough to find one at that convention because that vendor had them all.

At the next toy show my wife and I attended, she started searching for a Crystal Ball figure.  At that time I joked “Every Crystal Ball will be yours.  Crystal Ball rule in effect!”.

That is how it started.

Since then the Crystal Ball rule has morphed into lots of other rules.  Here are some of my rules to collecting Comics and Action Figures.

So as you read in the intro, I have the Crystal Ball rule.  When I show up at a toy show, all I need to say is “CRYSTAL BALL RULE IN EFFECT” and everybody who attends the show with me knows that we need to search for Crystal Ball.  Not just one Crystal Ball… every Crystal Ball.  I have no idea what I am going to do with them all, but it is fun.

My wife still loves Crystal Ball and she has several of them. 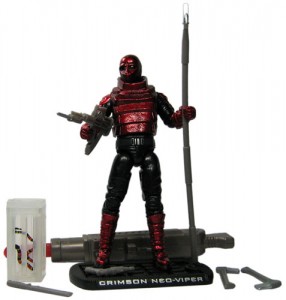 Crimson Neo Viper we can find.

The Crimson Neo Viper was released in the 3rd Wave of G.I. Joe Rise of Cobra movie figures.  The figure was a basic Neo Viper (which is a boring, hideous figure) but came with metallic crimson highlights.  These small changes made a boring figure amazing.  The figure also came with a complete array of weapons including a rifle, staff, axes and a case with a snake in it.

My wife fell in love with this figure when she first saw it.  After going to toy shows and searching discount bins at liquidation stores and big retail chains, she has been able to track down 14 of these figures.  Most are still sealed in the original packaging, and some are loose.  She loves them all.

Beta Ray Bill is one of my favourite super heroes.  He was created by Walt Simonson and made his first appearance in Thor #337.

I wasn’t very familiar with the character.  One of the first times I had ever seen him was when he was a playable character in Marvel Ultimate Alliance (one of Thor’s costumes).  While I was playing as Beta Ray Bill, all I could think was “why does this guy look like a horse?”.

My insane fascination with Beta Ray Bill happened when I read the Thor Omnibus by Walt Simonson.

I think his introduction is one of the best comic character introductions ever.  I like this character so much because of what Beta Ray Bill stands for.  He is an honourable warrior, who is on par with Thor. 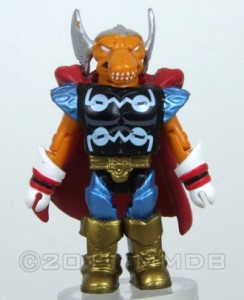 There are only a handful of action figures that have been released of Beta Ray Bill (the upcoming Marvel Universe version being on of them).  Since there are only a couple, they are very tough to find.

One that has eluded me is the Marvel Legends Beta Ray Bill.  I did find one online, which the vendor turned out to be a scam artist.  After figuring out I’d never receive my Beta Ray Bill, I filed a dispute with PayPal and I got my money back.  I have been able to track down one in Toronto.  I could order it online but after getting stung the first time I am leery about ordering another one.  I know which store it is at and I hope to get to the big city very soon to pick it up.

One example is the Beta Ray Bill trade paperback Stormbreaker.  I tried ordering the book online and it was going to be too much money to find it.  So yes, I could have easily bought it, but I tried to find the copy for the best price.  Luckily I found a copy at this past Fan Expo for a very good price.

Another example on being picky when it comes to Beta Ray Bill is the Minimates figure of Bill.  It was available for sale at the local comic shop one time for $9.99.  I couldn’t see paying this much for what I think are just Lego figures.  I was reminded at the time by my friends that it was Beta Ray Bill, but I told them the rule doesn’t apply if the price is too high.

A couple of weeks ago I was at Toys R Us and they had the Minimates Beta Ray Bill figure on sale for $5.99.  I liked that price.  I grabbed it immediately (they also had a Balder Minimates figure which is even more rare than Beta Ray Bill). 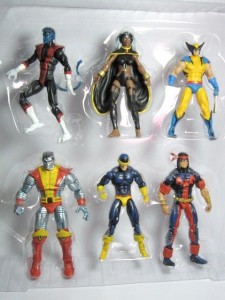 The X-Men rule applies to comics and action figures.

The rule is simple.  All X-Men or no X-Men.  No exceptions (except for the Wolverine clause… that pun wasn’t intended, but it’s funny).

Since there are so many X-Men Marvel Universe, Marvel Select and Marvel Legends figures out there.  If you buy one, you need to buy them all.  You can’t just pick and choose which ones you want.  Because of this rule I haven’t bought Psylocke, Magneto or the X-Force 3-pack that came out from Marvel Universe.  If I buy them, I would have to buy them all.

The same rule applies to the comic books.  There are so many X-Men titles and in my opinion, if I am going to buy one, I should buy them all.

The best way to save money in these cases are, just avoid them all X-Men stuff all together.

Now you may be asking yourself, what about the Wolverine Clause?

Well that is simple.  Now that Wolverine is an Avenger, I can buy Wolverine stuff because I am not buying X-Men action figures (and comics), I am adding to my Avenger collection.  It may be a silly clause, but it has saved me a bunch of money.