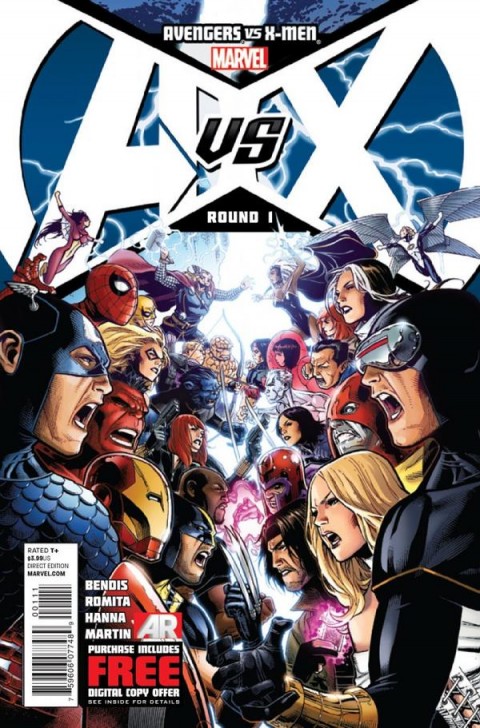 Similarly to film, summers tend to lend themselves to huge blockbuster story lines in comics. With seven years of planning behind it, Marvel’s 2012 foray pits the Avengers against the X-Men. The Hope-centric plot brings together the world’s greatest heroes and places them on opposing sides; one fights to save the world, the other to preserve its very existence.

With the uneventful “zero issue” behind readers, the first installment proves to be a little more of what we can expect as the Avengers-X-Men engine pushes forward. The opening pages of the issue effectively functions as a tone setting device. With the history of the Phoenix Force well known, Avengers vs. X-Men #1 depicts the destruction of a small planet, Gliese, as the cosmic force of nature continues its ravenous path of devastation towards Earth. The obliteration of the planet is a harsh, yet critical, exemplification of the gravity this story has and will have as it develops. The story, scripted by Bendis, hones in on the Avengers as a military operation set toward ensuring the safety of the world’s citizens. That safety however is undermined when a sequence of events leads to the arrival of Nova, who declares the Phoenix Force is upon them. This however feels as though it were a throwaway plot point, as Nova’s arrival failed to add any measure of gravity to the developing story. Bendis succeeded though in communicating the impact this story will have on the characters on both sides of the issue. We see this during the tense dialogue between Captain America and Wolverine, as well as during the short fight between Cyclops and Rogers preceding the arrival of the Avengers at Utopia. The sense of urgency for Hope’s safety from Cyclops sums up the clear statement this book makes with its first issue: the Avengers will do whatever they feel is necessary to save the world, while the X-Men and mutantkind will fight with every fiber of their being to ensure its survival.

Where Bendis’ script hit its necessary emotional points, the artwork of Romita was near perfect. Along with Hanna and Martin, Romita’s pencil work astounds with the arrival of the Phoenix Force as it rips across the galaxy and towards Hope,  straight through to the fiery impact of Nova’s space pod as it rips through the wing of a commercial airliner. The pages centering on the Wolverine-Steve Rogers discussion were drawn to be deeply emotional with clear, visualized tensions coming across the faces of both characters in an effort to directly mirror Bendis’ dialogue. These pages summed up the immensity of the story, however the Captain America-Cyclops pages in the closing panels of the issue emphasized those tensions further and were magnified upon Cyclops’ blasting of Captain America back into the Pacific Ocean from Utopia’s shoreline. Romita’s talents are at their height in this opening issue, as evident in Cyclops’ blasting of Cap as they are upon the materialization of a S.H.I.E.L.D. helicarrier high in the sky while Summers can only stand in awe.

While no “zero issue” is ever a worthy prologue to a bigger story, AvX #0 really failed to properly hype this event. Thankfully this issue succeeded where “issue zero” fell short. While it merely acclimated readers to two of the principal players, Avengers vs. X-Men #1 drops readers right into the heart of the story by differentiating the Avengers’ and X-men’s stances on the subject of Hope and the Phoenix Force. Bendis succeeded in crafting a solid first issue that functions as more of a prologue than issue zero. This enables the reader to jump right into the story without its movement being laboured throughout the first issue by the necessity to establish the relevant plot elements.  This isn’t a slow brewing story, one whose action and dramatic events are assured with each subsequent issue.