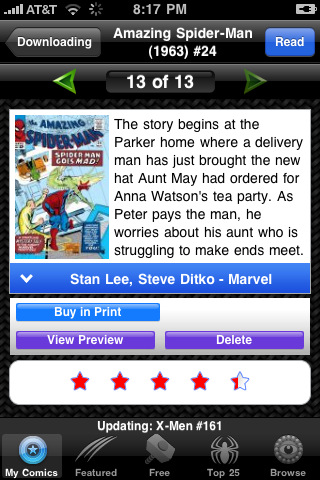 Long time readers know that I am a huge supporter of both digital comics and the local comic books store. Many out there believe that you can’t support both. That you need to pick a side and the time is now. Do you want to live in a world where everything is digital and comic book stores don’t exist? Do you? Do you?!

Hyperbole aside, this all or nothing argument is pervasive and is only hurting the industry. Mark Waid recently announced that he was going to try digital distribution with some of his creator owned works. This led to him being accused of trying to destroy print comics, and, by extension, the local comic shop. One store owner in Florida actually announced that he will no longer carry any comics by Mark Waid. Sigh. I almost don’t know where to begin.

I would  like to mention that digital comics are probably not the Antichrist. Nor will they spell the end of the local comic book shop. Advancements in technology and new distribution of media historically have been better for an industry not worse. As an example I would like to mention Beta and the introduction of home movie rental. It took Hollywood studios a long time to get on board with allowing the machine to exist (taping stuff from television was copyright infringment in their minds), but eventually they sold copies to video rental stores at high prices. Then eventually the studios sold copies to the general public for a high price which lowered over time. The point  is that movie studios saw the Beta machine (or VCR for those of you who have no idea what I am talking about) as something which was going to cause huge losses in their industry. They didn’t see it (at first) as a way to reach more people and make even more money. I know that video stores are hurting now but that is indicative of an inability to change with new technology.

There always needs to be some sort of intermediate step between the producer of media (publisher) and the final customer. For comic books it goes from publisher to Diamond Distributors to some form of retail to the customer. Companies in general are not allowed to control every step from production to sales.  Technically monopolies aren’t allowed in Canada and the US (I know I am oversimplifying here; Diamond got around the monopoly problem), but the point is that producers of media would not really be able to sell directly to the customer with ease, even if it is a digital platform. You need to be able to reach a customer so the money saved by cutting out the retail store would need to be invested in advertising. But, for arguments sake, let’s say that print comic books die and that every comic book is now digital, and the customer would buy digitally right from the publisher. Would this kill the local comic book store?

Definitely not. The local comic book store has needed to reinvent itself several times over the last 30 years. They have gone from carrying only comic books, to having extensive silver and gold age collections, to adding toys, t-shirts, and games to their shelves. Fans (and young fans who don’t fear the digital bogeyman) will still want to visit a store to buy toys and t-shirts of their favourite characters. You can’t buy a digital shirt (I know you can, but you know what I mean). In addition, collected paper trades of digital comic books will still sell. Comic stores don’t sell comic books; they sell a hobby. And this hobby changes over decades and stores need to adapt. And successful stores do adapt.

I subscribe to Marvel Digital Unlimited. This has caused me to buy more physical comic books, not less. Comic book stores should be pushing for an actual way to support and promote digital sales. They should not be trying to discourage it. I have mentioned this before, and, at the risk of sounding like a broken record, I will again: the comic book  industry should follow what the video game industry has done with Microsoft Points and Sony Playstation dollars. The publishers should allow a comic book store to sell cards for various dollar values that can be redeemed online. The percentage that a comic book store makes should be the same as the do for paper comic books. So as a customer I go into my local comic shop. I buy a $20 card of Marvel bucks; I pick up a snazzy new X-Men shirt while I am at it. Then I go home and use the $20 card to purchase some comics from Marvel digital. Who wins in this scenario? Marvel gets more sales, the shop gets 2 sales, and I now have more comic books to read and a new shirt to wear.