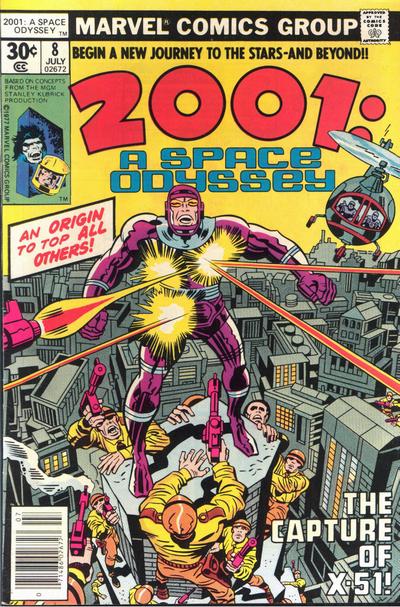 Aaron Stack aka Z2P45-9-X-51 aka X-51 aka Machine Man is an android hero created by the still very creative and fertile mind of a 60 year old Jack Kirby.

The US Government loves trying to come up with super soldiers in their labs don’t they? You’d think Captain America was enough but the boys at the Pentagon weren’t satisfied; they got Dr. Abel Stack, a computing genius, to create a series of robot soldiers that could think and act like men. In total 51 of these experimental robots were made. Dr. Abel had a hunch that in order for the robots to think like humans they had to be treated like humans and so he took X-51 (the last in the series) home and raised him like a son.

The other robots started malfunctioning (because the good Doctor was right, they did need TLC) so the Government activated their self destruct devices. Dr Stack removed X-51’s self destruct mechanism just in time but was himself sadly killed by it. 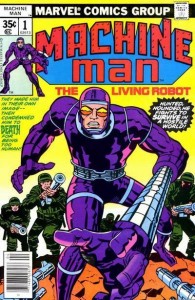 Machine Man was created during Kirby’s 2001, A Space Odyssey run. By April 1978 Machine Man had his own title; it lasted 19 issues and actually had Steve Ditko doing the art from issue #10.

Machine Man has been very active in Marvel continuity from the beginning; he’s been associated with SHIELD, Avengers, West Coast Avengers, NextWave, and Secret Avengers (during Civil War). Actually in Iron Man/Captain America: Casualties of War #1 (Feb 2007), Iron Man and Cap meet to try and avoid a war, they do a lot of talking and Iron Man mentions the encounter he had with Machine Man (Iron Man #168, March 1983). Iron Man had just got back heavy onto the sauce and attacked Machine Man, who was just trying to seek advice from a fellow machine (how he saw Iron Man). It was this incident with Machine Man that planted the seed for Iron Man’s wish for superhero accountability.

This first appearance of Machine Man is hidden in an ignored little 10 issue gem of a run called 2001, A Space Odyssey. The title was published in the late Bronze early Copper Age an era of comics that has many hidden gems.

Interesting to note is that 70 of the 72 CGC’d copies of this book grade at 9.2 or better, that has to be some kind of record. CGC 9.6 copies are trading at around $80. My advice is to scope out a strong tight looking squarely bound CGC 9.4 for around $40, or even better yet pick up a sharp, crisp raw copy for about $20. It will prove a worthy edition to your little stash of 1970s keys.