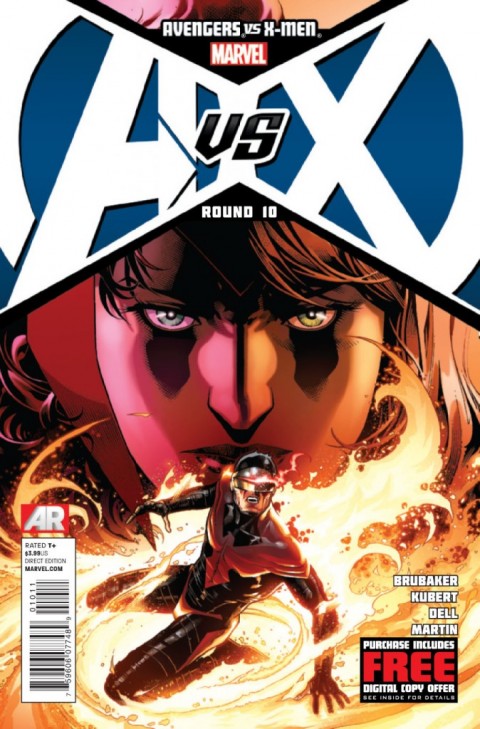 Avengers vs. X-Men, the high-octane superhero romp featuring the X-Men and the Avengers continued last week with its tenth issue. The Hope centric plot plodded onward, bringing the expansive mini-series ever closer to its conclusion.

Following the events of previous installments of the story –spanning many tie-in issues, as well as the main title itself– we find Hope with the Avengers in the mystical city of K’un-L’un. At the end of the previous issue, Cyclops had arrived and demanded that Hope return with him to Utopia. Attempting to blast Hope, Iron Fist pushes her out of the way, saving her from Summers’ Phoenix powered optic blast. Iron Fist attempts to subdue Cyclops but is stopped and quickly cast aside. The plot point actually proves to be crucial, as simultaneously Hope runs for a cave to meet Lei Kung at the suggestion of Iron Fist, while Iron Man swoops in to delay Summers’ advancement. While Cyclops fights the Avengers on K’un-L’un, on the earthly plane, we find Captain America and Professor Xavier in Russia, discussing the state of mutant affairs. The page feels as a set-up to re-implant Xavier as the chief figure in the mutants’ corner of the Marvel Universe. To what end this plays out is unclear, but Xavier’s return to the forefront in the last several issues may lead to bigger things for a character which has for the most part fallen by the wayside over the last five years. Making it clear he believes Scott and Emma are wrong, it pits them opposite to each other metaphysically, making for an interesting dynamic that could form after the series’ conclusion. The seriousness of Xavier’s worry plays out in the following pages as we find that the Phoenix empowered Emma Frost has seemingly taken some of her teammates captive, much to the chagrin of Magneto who remarks on her actions, before being put in his place by the former White Queen. Another potential nod to the end of the series comes as Magneto, on his knees, peers towards his helmet. Combined with the final page of the issue, it’s foreseeable that Xavier and Magneto will work together to end the Phoenix’s threat.

The title takes another twist, as Hope and Lei Kung arrive from the cave, a cave home to the immortal dragon Shou-Lao, and appear riding the young, presumably recently hatched dragon as it breathes green mystical fire upon Cyclops. Despite hurting him, Cyclops fires back and wounds the fledgling dragon. As he steps in to deliver a final blow, Hope and Lei Kung step between him and the dragon. In a pivotal moment for the character, Hope for the first time decides who she wants to be, defining herself not by the ideas and needs of others, but upon her own conceptions of right and wrong. A questionable move is made during the conversation; during Summers’ advancement towards Hope, she seems to absorb the power of the dragon and herself breathes fire, mimicking the powers of the dragon as she would any other mutant. This is questionable in the sense that, as far as we know as readers, Shou-Lao is not a mutant, nor are its powers and subsequently Iron Fist’s based in genetics, leaving this pivotal plot point uneasy as it’s by all appearances without context and lazily defined. It’s interesting as a representation of Hope’s coming of age story, but is without any sort of precedent in Marvel’s own continuity for Hope. Extending the scene, Hope uses the mystical arts of K’un-L’un as Iron Fist would to remove Cyclops from the mystical city. The issue concludes with the Avengers in celebration over what Iron Man describes as a “turning point.”

Kubert’s artwork truly helps define the immensity of this book’s scope. His work in this issue spans multiple locations, each possessing finely detailed characters, environments and an aptitude to create amazing elemental effects when combined with the work of inker John Dell and colourist Laura Martin. The opening two pages are a testament to this, as Cyclops fires at Iron Fist and Hope with his optic blast. A yelling Iron Fist leaps in to push Hope out of the way, moving her from Cyclops’ line of fire just as his blast connects with a nearby stone. The stone shatters as the environment is engulfed in a sea of red, the bodies of Iron Fist and Hope illuminated by the ruby redness of his energy attack. Martin did a fantastic job in the upper panel, not only shading the immediate environment in the red hue, but additionally she extends fine streaks of red across the ground, peering ever so slightly above nearby rocks. The page is completed by Dell’s inks which defines the total brightness and power of Cyclops’ energies. Kubert and Martin again come together on the following page. The page is illuminated by the Pheonix’s power, embodied by a blinding light illuminating their immediate area. Kubert’s attention to detail, from the disposition of Iron Fist, to the nonchalance of Cyclops, down to minor structural touches such as the damaged buildings that clearly allow you to see through the debris holes and through to the other side, are testaments to Kubert’s pencil work. Another fantastic panel features Iron Man flying at full speed into Cyclops, streaks of wind and energy trailing behind him; Martin and Kubert again demonstrate a knack for bringing the environment to life regardless of the panel’s composition. From the icy, watering eyes on Captain America, to the immense awesomeness of Shou-Lao, the immortal dragon, the artwork in this issue is worthy of praise in all respects.

The series has been up and down throughout its own pages and those of its tie-ins. This issue was no exception, but finally introduced the game-changing plot-point that will end the series. While it contains some questionable elements, as a whole the issue was entertaining with its action, while the story was solid despite minor missteps. The artwork nicely suited the plot, bringing the entire issue together to fully illustrate the scope of the story. While the storytelling itself has been choppy due to the rotating writing arrangement, this issue works on its own merits and functions well as the turning-point of the series.