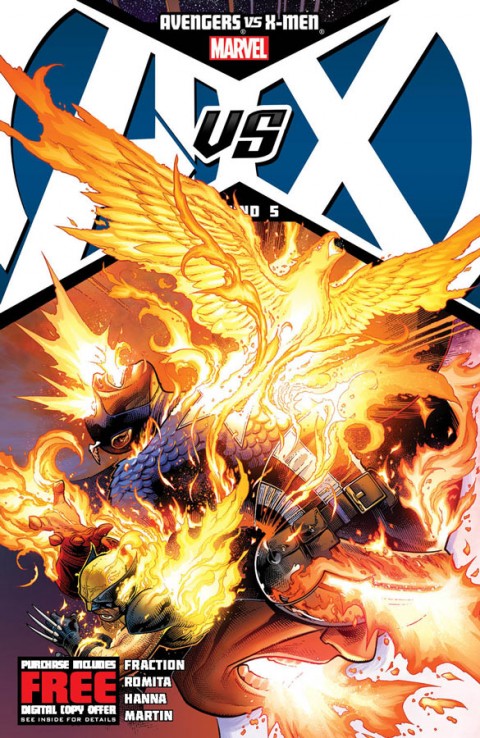 In the fifth installment of Avengers vs. X-Men, the highly anticipated mini-series featuring Marvel’s X-Men and Avengers teams, the pace definitively picks up as tensions come to a head between the two groups vying to impose their wills in affecting Hope’s destiny. However, despite an epic-scoped story, the collective of Marvel architects behind the tale fail to capitalize on the story’s potential with a lackluster fifth outing which implodes the established X-Men mythos with a barrage of head scratching, Phoenix related developments.

The issue commences where the previous installment concluded; with the Phoenix Force rapidly approaching Earth, the X-Men and Avengers converge on the Moon with Hope firmly placed between their ranks. Avengers vs. X-Men #5 features, and greatly hinges upon, Hope’s ongoing internal monologue as she becomes overwhelmed by the powers quickly taking over her body. This was the most successful aspect of the issue, an expertly written story device penned by Fraction which functions dually as a means to characterize the struggles deep within Hope’s consciousness as she copes with the strain of her race’s future, placed not so delicately on her shoulders from the time of her birth. As the strongest piece of this issue, Fraction’s narrative  glues the scattered story elements together and gives it continuity. Scattered around Hope’s thoughts is tense action as Wolverine attempts to slay the young and very red-headed mutant as per her wishes, an act which itself has a rehashed feel to it based on the history between Wolverine himself and Jean Grey. In an odd step as the story pieces itself together, Iron Man constructs a large Iron Man suit reminiscent of a Mech Warrior robot which is used to attack the Phoenix directly, an attack which evidently resulted in a divergence of its target. The culmination of this leads to a very strange and unexpected twist to the plot; instead of the Phoenix taking Hope as its host, it splits itself between Cyclops, Emma Frost, Namor, Colossus and Magick.

The move effectively makes the group a Phoenix Force collective, one whose powers and their breadth are unclear. It’s a questionable move without considerable precedence for it beyond pieces of the Phoenix having previously been split between the Cuckoos, Rachel Summers and Korvus’ sword for so long. Despite this, the twist seems senseless as it effectively brings readers back to the point they were before Hope’s destiny became increasingly apparent. With the Phoenix having mostly always been tied to a single character, this development drags the mini-series and its tie-ins into murkier territory, which can be good from a storytelling perspective as it lends itself to unpredictability. However in the case of this issue, the writers seemed to throw a random, arbitrary event into the story without cause or reason that’s apparent at this point of the plot’s development. Despite the shakiness of the book, it instills a measure of intrigue into what was chugging along at a predictable pace, however proceeding issues will highlight whether the execution of this piece of the tale will have a positive or negative impact on the outcome.

While the story didn’t impress, the art supplied by Marvel mainstay John Romita Jr. more than over-compensated. Romita provided action-packed, creative and diverse visuals which captures the emotion and gravity of the circumstances that face the characters involved. Where the storytellers’ plot perhaps fails to illustrate the overall connection between the Phoenix Force and the rest of mutantkind, Romita characterizes the relationship quite well in a series of panels which displays the reactions from many of Marvel’s notable characters with stakes in the unfolding events; Professor Xavier, Legion, the Avengers in space, Lei Kung and the Scarlet Witch all feel the immensity of the Phoenix’s power as it nears them. It presents an ominous landscape with a gravity entwined inherently inside it, showing the reader how the varying  corners of the Marvel Universe view the events uncoiling before them. The pages set upon the Moon have a different feel about them, encompassing a furious fight between Wolverine, still freshly recovering from his burns, and Cyclops who continues to defend his principles and beliefs despite a bloodied mouth and wounds courtesy of the Avengers’ resident Canadian. Those very wounds appear as red streaks across Summers’ abdomen, the pain accentuated by the grimace on his face and his visible favouring of his right side. The new Phoenix styled costumes designed for the five members of Cyclops’ team, however, all feel grossly exaggerated. Cyclops’ new costume even seems like a redesign of Nightwing’s costume. The fiery exit from the Moon is appealing, but the entire concept of the Phoenix collective leaves space for uneasiness to take up residence, and although Romita’s visualization makes the transformation a little easier to digest, the entire spectacle itself is questionable.

Avengers vs. X-Men #5 was a mixed bag. Longtime Uncanny X-Men scribe Matt Fraction returned to the characters he wrote for nearly three years, and much like his run on the title, he displayed varied and measured command when helming the personalities of the different characters he was charged with writing. And he did it well, as he has in all his work. The issue’s failing has little to do with Fraction’s writing, rather the book has an air of having too many architects designing the story’s blueprint. The arrangement works well as a conceptual thought, but is being poorly executed. Despite the very obvious communication between the co-plotters, Avengers vs. X-Men lacks a defining voice with its rotating writers arrangement, leaving Romita as the sole lynchpin in the series’ creative continuity. In the case of this story, as big as Marvel has marketed the epic, the book needs a single voice. While drawing the blueprints lends itself well  to circulating ideas, as an independent read, the story would be better served to be told by a single writer as opposed to the current mutual storytelling device which throws together Marvel’s top creative minds and allows them to tell a piece of the story at a time. Avengers vs. X-Men had plenty of promise at the outset, however it has plodded forward since the first issue. Even still, despite the strange twist contained in this issue the series has plenty of time to recover its senses, and considering the minds behind its architecture it should be expected.