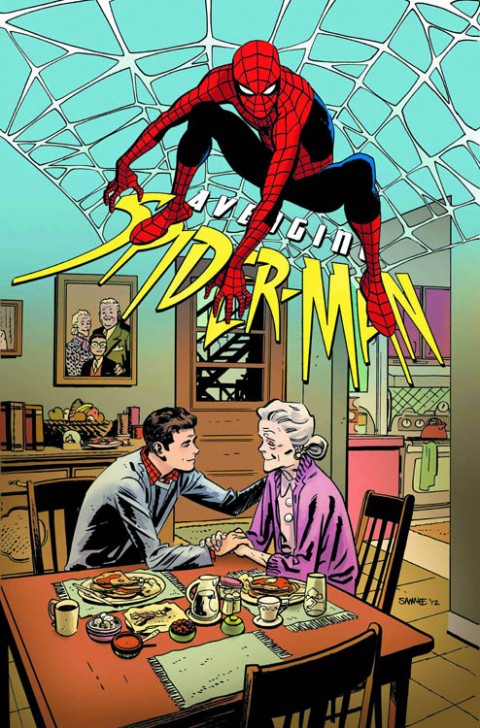 The celebration of Spidey’s 50th continues with an Uncle Ben tribute issue in Avenging Spider-Man #11. There is very little avenging to be had in this comic (only 2 pages actually) and the majority of the issue deals with Aunt May and Peter meeting at Uncle Ben’s grave and talking about the loss and sadness that they still feel after all these years. The death of Uncle Ben is the defining moment in the origin of Spider-Man, and as such is wholly appropriate subject matter for an anniversary issue, but this is not a great jumping on point for new readers. In fact, if this was your first experience with Spider-Man you might be a bit confused. Or at least a bit unimpressed with the lack of action. Spider-Man isn’t generally a comic where people just sit around talking about their feelings. As such, this is an issue strictly for Spider-Man fans.

That isn’t a bad thing, but I am aware that the reason I enjoyed this comic book is because I like Spider-Man; I wouldn’t decide I like Spider-Man because I enjoyed the comic. That sounds like faint praise, and I don’t mean it to, it’s just that this is a story you could only tell with 50 years of backstory and character development. Zeb Wells does a masterful job using flashbacks and present action to convey the guilt and pain that Peter still feels after all these years. And we are eloquently reminded of why with great power must come great responsibility. 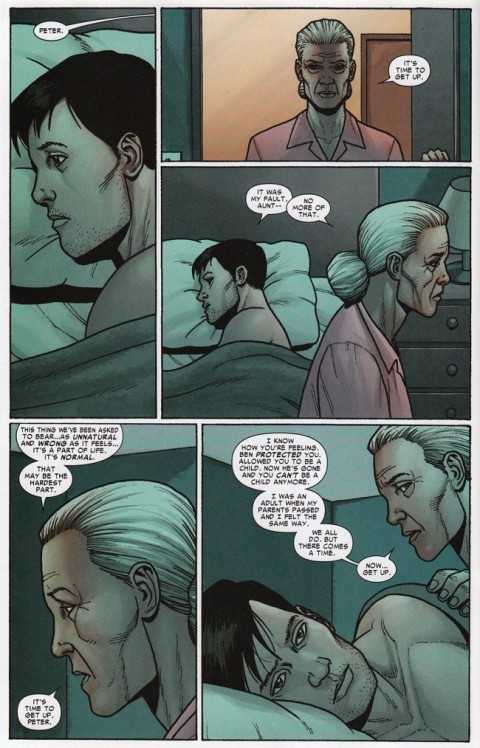 Steve Dillon is an interesting choice for artist. I have been a fan of his since Preacher, but he has a very distinct style. So distinct in fact that Aunt May looks a bit like an Aunt Marie/Ma Gnucci mash-up and I half expected to see her put young Peter in a coffin and send him to the bottom of a swamp. Dillon is very polarizing with fans and some may be turned off by his style. I must confess I’m not sure it completely works for this issue; the similarities to his previous, grittier works are just too great. I also felt that compared to Chris Samnee’s cover Dillion’s art could be quite a surprise once you open up the comic book.

This issue was a gem for me and a pleasure to read. I have been thoroughly impressed with all of the Spider-Man works that Marvel has published as part of the 50th anniversary celebration, but while Spider-Men and Amazing Spider-Man are accessible to all readers, this book really is a love letter for established fans of the character. If you are a fan of the web head you’ll enjoy having this book in your collection (even if you don’t normally pick up Avenging Spider-Man), but others may wonder why Spider-Man just sits around with an old lady and looks sad.