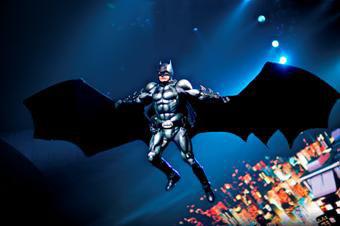 “Extravaganza”,  “Mesmerising”…   A small clutch  of ‘reviews’ parade across the Batman Live promo-poster,  all accompanied by a collection of proud stars… 4’s and 5‘s.  One such review reads “POW, Batman saves theatre” and (if I’m honest), I rather like that J   Though,  Batman hasn’t really “saved the theatre”?!  the show is staged in a rather raucous Arena (for starters) – and rightfully so.  In an Arena, the kids can flaunt their forcible, foam fingers and grown men (fanboys) can quite happily dress as their favourite heroes and villains from the Batman Universe and everything is roses… I even had a hotdog.

Let’s just get one thing straight upfront, a Batman stage show shouldn’t be cool… the increasingly sceptical pop-culture guru inside us all makes a “hmm” noise and scratches its chin with one eyebrow raised at the thought of it… but, somehow… it is cool.

It’s bright and bold and camp as Christmas, it’s corny and cheesy but that’s why I loved it – AND I think the other audience members loved it just the same.
In a land of open minds, Batman can own (almost) any mode of story-art, bringing a different version of himself every time – and,  every time… it’s fine.

Upon arrival, the stage is shining and the sounds of Gotham City rattle around The floodlit arena as we take our seats.  Distant police sirens and car horns help set the tone, searching sky lights wave across the animated sky on the big screen as they simultaneously wave across our excited faces in the Arena itself… all very promising.  The stage reaches out into the audience with a satisfying depth, aided by the images on the big screen.

Almost as tall as it is deep, its curious scaffolding and big spotlights are teasing and exciting.  The buzz is electric and Nick Grace’s show is coiled backstage, waiting for its chance to wow us.

Looking around… It’s obvious that every, impatient audience member has a different investment in the character (if, of course they have any investment at all).  Kids as young as 4 and 5 are sitting nearby,  some with an over enthusiastic father, proudly wearing his  Batman shirt or joker face-paint… a tolerant young mum supervising them both.   ‘normal folk’ (whom appear to be in the arena on a whim) with a relaxed posture and an ‘entertain me’ face, provide a nice balance of people, some deeply invested in the characters – and others on date-night looking for a thrill.

Fanboys (and girls) whom are dressed in their finest batman costumes are making a welcomed, supportive racket and – draped in their foam fingers, masks and glow sticks, they’re a fun addition to the evening.   I’m somewhere in the middle, I adore the character, the comics, the cartoons, the movies and the 60’s TV show… I love the Batman universe from top to bottom but, excited as I am… I’m sceptical – and (like everyone else) I have an opinion of the show before it’s even begun. 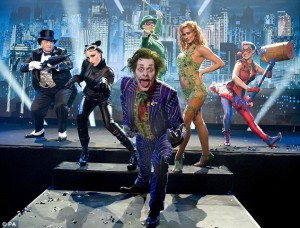 Then it does begin…  lights down…  a shocking, booming sound and light explosion silences the crowed and I rush to finish my hotdog.  Bruce Wayne’s parents are shot, a swift and heavy opening deals with Batman’s origin kindly – and sets the ball rolling on a Batman story that isn’t about Wayne’s parents’ death or his personal anger,  refreshingly, it’s… kind of, a one- shot ‘what if’…  a short story about a young circus performer whom finds himself recruited by Gotham’s dark knight… the young Dick Grayson – and so the stage is transformed into a giant circus… showcasing  The Flying Grayson’s trapeze act.

The video screen is vivid and bright, we see the animated, turning pages of a comic book as it flicks through – and lands on the new location.  Various circus acts flood the stage, acrobats, contortionists and dancing horses lead us into a trapeze act performed by The Flying Grayson’s themselves.  Narrated by Dick, the trapeze act is dangerous and impressive and met with timely “oohs” and “ahh’s” from the (now transfixed) audience.

A sudden change in pace and a scary looking accident is suggested in slow motion as the flying Grayson’s fall to their death in eye-shot of their son.   Jim lee’s art is perfect in 3D layers on the big screen showing a terrified circus audience witnessing the terror of death… and – in a blink, the happy, bouncy, fluffy circus is killed off – and a crime scene is left behind with another slick and stunning scene change.   A rather ‘gangster’ Jim Gordon tells us “the cables were cut” and he suspects the Joker… the act was sabotaged!  Gordon asks Bruce to “take the kid?” and reluctantly, he agrees.   Comic book pages flick across the giant screen again and we find ourselves at Wayne Manor for dinner… the video graphics synching with the props on stage, a giant dining table fills the entire space resting at an angle that works in perspective with the video display/background and is completely out of scale for the actors on stage – but makes for an interesting view.  Dick is thankful to Bruce but suggests that, the only person who can help him find justice…  is Batman.  The bat signal is animated on screen in the distance and then flows through the crowed in the Arena… it’s time for Batman to take the Stage.

After the plot line is established and centred on Dick Grayson, we’re treated to a sequence of villain heavy scenes starting with Catwoman.  The new set is a cluster of rooftops seeming to poke through the stage floor with a high view of Gotham on the big screen, suitable city noises seek our silence and Catwoman descends from the sky on rope with a curious, catlike body language and a sneaky soundtrack. Batman is welcomed to the stage by a cheering crowd with a dazzling first appearance from high up in the darkness with impressive music and a satisfying stage presence.   A flirty fight ensues between the 2, a carefully coria-graphed fight takes place on Gotham’s canopy as the 2 come to blows… the volume of space on stage from floor to ceiling  is well used with both characters on a wire. The video screen accompanies the action with a well-timed display as the 2 dance across the cityscape.

At this point in the show I’m ready to see our hero, but I can’t help but wish he looked a little more… well, cool.  He kind of looks like a big child in a Batman muscle suit, one of only 2 things that bugged me about the show.

Flirting and fighting over… Comic book pages turning on the screen again and we’re transported to a casino, dancing girls, acrobats, balancing acts on stage… and the Penguin.   A small and snarling Penguin is a casino owning gangster and we’re treated to a beautiful show from his Ice dancers and –  once again, the stage is filled from floor to ceiling with dancers and performers on wires, the lead dancer is introduced by the Penguin as the Ice Queen and she looks amazing.  The stage is then filled with a myriad of villains, Penguin, 2 face, Catwoman, Riddler all plotting crime and grime together.

The Joker is quite rightly introduced on a grander scale with his own setting in ‘Jokers Circus’, a beautiful (and quite funny) Harley Quinn takes the stage and engages us from the moment she arrives.  Harley proceeds to introduce the Joker (as only she can) and the king of comic book villains makes his arrival as a giant Jack in the box… springing the height of the stage ceiling and bursting from set with exploding confetti and fireworks.

For me, the Joker needs to make us laugh AND scare the hell out of us, all at once! – and while a version of the joker for the stage might need to be a bit more ‘jazz hands’ than a version on screen or graphic page… he’s engaging and intriguing… (maybe a bit too old and camp for my liking) but, he’s fun.   I want to secretly root for the joker and feel guilty for liking him… I didn’t naturally accept this man as the joker (as maybe, I’d hoped I would).  He looks a bit ‘dated’ and tired in his costume and I didn’t believe him as I had previously believed Catwoman, Penguin and Riddler.

Every inch of the stage is utilised from back to front, floor to ceiling and the lights and sound effects are perfect and encompassing.  The show is a spectacle for sure and very impressive to look at.

key moments in the show that stand out are…  Jokers giant face made of dancing goons and acrobats, Joker always seemed to arrive with an aunterage, whenever he appears on stage it’s a big deal, lots of people, guns, cars and… a hot air balloon, in which, he refuses to ‘spring’ Harley Quinn from Arkham Asylum and in return… she shoots him down (literally) with a rocket launcher (again – very impressively) with explosions and fire on stage.   The Batcave is exciting on both the big screen and in 3 dimensions on the stage and the Batmobile J… the car itself is a little ‘fake looking’… but the drive from the Batcave across Gotham to Arkham Asylum is one of the more memorable moments in the show, hugely enjoyable and well delivered in perfect time to reward your now uncomfortable bottom (as it’s quite a long second half).  A couple of personal favourite moments for me were Scarecrow, a mysterious and silent, stilt wearing sight, he looks beautiful and scary and appears to move in slow motion – and Poison Ivy… hot.

The characters are perfect for the stage – and most are brought to life with a brilliant energy by the actors, the show IS cheesy and fun and there’s plenty happening from all angles.  my only 2 problems with the whole show are Batman’s cartoon looking muscle costume – and I think the joker could’ve been a bit more edgy and scary.   Also, I imagine that sitting square-on to the stage is a must for full enjoyment.

Overall, a very well put together piece and very enjoyable.   It is, what it is.
3.5 stars.