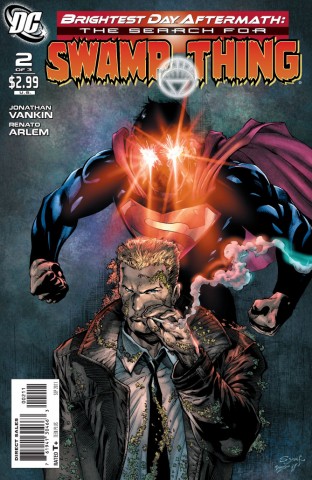 The search for Swamp Thing continues this week with the second issue of the mini-series directly following Brightest Day. Let’s check in with good ol’ John Constantine and see how things are going. Onward!

At the conclusion of Brightest Day, Alec Holland rose from the grave and again became Swamp Thing once again. After fighting off his dark doppelganger, the Swamp Thing entity lashed out at transnational corporations responsible for the world’s environmental concerns. John Constantine is next on its hit-list, but the question is, why? Constantine visits Gotham to meet with Batman and leaves town after gaining his opinion on combating Swamp Thing and the strange infection that’s befallen the wily sorcerer.

On an airplane destined for Metropolis, Constantine finds himself stuck pondering the one irritant he can’t stand, people. Constantine copes as best he can until the plane arrives in Metropolis, but once it does the aircraft is attacked by an onslaught of vegetation desiring to bring it down and take Constantine. At the last moment as the plane is about to crash, Superman flies in to save the crew and passengers. Once all have exited the craft, Superman and John talk about the matters at hand, while Supes makes it clear he’s not a fan of Constantine, his character, or his actions. Superman, however, tries to get a little too physical and falls prey to one of John’s protection spells. After the man of steel gets his comeuppance, he wonders aloud why these superheroes can’t simply help him find the man who’s the source of their ills: Alec Holland.

Meanwhile in a swamp near an old LexCorp laboratory, Holland is startled by a man in a protective suit who takes him into the building. During their conversation Holland feels weary, as though there’s a piece of him that’s been lost. High above Star City, Superman flies with Constantine in tow, dropping him off at the Star City forest. Constantine quickly lights a cigarette and devises a protective spell around himself, but no sooner do they arrive does Swamp Thing make its presence known, attacking John and telling him that it hopes to assimilate his consciousness into its own to replace Holland. He’s attacked, yet saved by Superman. After the ordeal, Constantine tells the Big Blue Boy Scout that once he finds Holland, he may have to do something drastic to him in order to save the world. Back inside the lab deep in the heart of the swamp, Holland discovers the truth about what’s missing in his life.

The story was okay, although the characters were written quite well and I found the interaction between Superman and Constantine to be especially entertaining. I’m somewhat more confused on the direction of the story, and there are very clear plot holes in this series relating to Swamp Thing and Alec Holland’s combined role in the DCU. At no point has it been indicated that Holland and Swamp Thing have become separate entities after clearly merging in Brightest Day, so to throw this curve ball as well as the ending of the issue at readers is unquestionably strange. Constantine’s character definitely made the issue decisively readable, but the story itself feels laboured and has evidently resorted to throwing haphazard wild pitches at readers without so much as an explanation.

I liked Arlem’s artwork quite a bit. The early airplane scene characterized both the sentiment we all feel when seated next to someone on a plane who refuses to quiet themselves, while syncing both his reactions and mannerisms to his seat-neighbour with the dialogue. I also enjoyed the panel where Constantine purely calm amid a plane full of screaming passengers as they’re attacked by Swamp Thing. I also thought the verbal exchange between Constantine and Superman was well drawn, the artwork matching up well with Supes’ condescending tone towards Constantine, while his body crumples once John activates his protection spell.

There are however minor issues I have with the work. Much of the art feels too dull and dreary, and although the environment in the issue seems intended to be that way, Ciardo’s colours seem to overdo the tone of the work. Also, I couldn’t help but notice the visual miscue early in the issue where on one page Constantine’s hand is only partially green, while on the following page it’s completely green. The lack of continuity is starkly apparent. Despite these, the issue’s artwork was still enjoyable, notably pages such as the one where Constantine smugly blows cigarette smoke into Superman’s face.

While the story was nothing to write home about and the artwork was solid, I feel like this series as a whole is a waste of time. Although I’m still enjoying Vankin’s take on John Constantine, it’s the most interesting part of this series. I’m hard pressed to care about the Swamp Thing story entirely because I’m not even sure what it is I’m supposed to be caring about as a reader. This isn’t even a matter of Vankin’s writing, rather it’s systemic stemming from the Brightest Day fall-out which pulled Swamp Thing out of nowhere as the series’ big revelation, one which was completely lost on me as  I read it. We’re not clear on Swamp Thing’s motivations, much less what his story is to be about after two issues of this series and an issue of Brightest Day completely dedicated to it. The story is generally unenthralling, there are aspects of the story which Vankin pulls out of thin air. If you’re interested in the characters, proceed with caution. Otherwise, steer clear of this series.