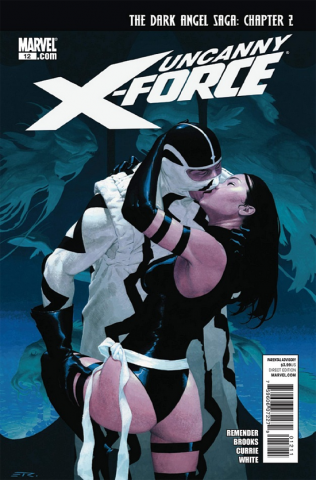 Throughout Remender’s run on the latest incarnation of X-Force, Warren Worthington’s continuing struggle with his Archangel personality has been front and centre through the team’s initial missions straight through the latest story arc, the Dark Angel Saga. Now in its second part, X-Force (sans Worthington) have travelled to the Age of Apocalypse (AoA) dimension to find the one thing that can save Warren, but have found only double crosses, awkward encounters and surprises.

After travelling into the AoA dimension along with Dark Beast to recover the Life Seed, the team is left stranded when Dark Beast leaves without them once the dimension’s mutants destroy the Seed. It being the only thing that can save Warren, X-Force is left scrambling for both a way home and solution to save their friend. The remaining mutants in the world take X-Force to New Atlantis where they meet the leaders of Mutantkind: an aged Magneto and Jean Grey.

Deep in the heart of New Atlantis, Logan stands atop a balcony looking into the deep blue ocean. He’s eventually joined by the AoA world’s Jean Grey and they talk about their differing pasts and the loves they’ve lost. The two share some tense moments where they get caught up in their lust for each other, Logan making it clear that he isn’t her “Wolverine,” noting in his internal monologue that he’s promised to another woman. Regardless, they share a kiss that’s quickly interrupted by a Sentinel. It attacks Jean and Logan, but she steps in to fend off the Sentinel, believing she can simply get it done faster than the Canucklehead. Jean quickly realizes that the anti-mutant forces have found their location and they need to evacuate. The mutants reconvene and decide to move out and find Gateway, a mutant who can travel between dimensions. They travel to the location he’s imprisoned within but are met with some unexpected surprises: the Brotherhood and a man long presumed dead in that dimension–Wolverine.

The issue felt as though it slowly boiled to its conclusion. It provided some tense, emotional moments throughout the early pages as AoA Jean Grey and 616 Wolverine reminisce about their pasts and lost loves, all building towards a clandestine kiss obvious from 10 kilometers away. There was very little surprise in it, much less the majority of the issue which was largely uneventful as it focused a substantial amount of plot to the Wolverine-Jean story. It was very an unfulfilling issue for much of the book, although I enjoyed watching Wolverine as he was forced to interact with both Jean Grey and Nightcrawler. Beyond the rather expected kiss, the biggest surprise was saved for the end when it’s revealed that the AoA Wolverine has survived and taken up a prominent position in the dimension’s hierarchy. Considering the conversation had between Jean and the 616 Wolverine, it should create fairly tense decisions in the coming issues where she may face the choice of either staying to fight, or returning with Wolverine and X-Force to their home dimension. The issue only incrementally moved the Dark Angel story forward, but still packed enough to be enjoyably readable.

I really liked the first page of the issue. In a series of five horizontal panels, the page gradually pulls in closer and closer to Wolverine who we eventually find is standing by himself at a balcony deep within the New Atlantis stronghold. It nicely characterizes the immensity of the weight Logan’s thoughts are having on him, contrasted against the large scope of the landscape; a solitary man with much on his mind while an entire world functions around him. The page was followed by another series on the balcony where Jean crept up behind Logan and joined him at the balcony. I liked how the sequence was put together as Jean slowly comes into the picture from the shadows and eventually takes her place alongside Wolverine; the final panel showing them side-by-side as they recollect their pasts and how they felt about the alternate versions of each other.

The next several pages are fairly straight forward, focusing more on the moment-by-moment interactions between the characters. This all built up to the kiss, however I didn’t like how the panels were arranged on that page. It begins with a single panel at the top, moving then to the right, and then awkwardly to the left side of the page before continuing on to successive panels down the right side. Each captured their kiss almost frame-by-frame up until its occurrence, before breaking away once the Sentinel arrives. This leads further on into a great fight scene where we’re reminded just how strong Jean Grey is as she decimates the Sentinel in seconds. The issue employs much of the same throughout, but uses perhaps too much white space in a number of pages later on, while almost mirroring the Jean-Wolverine kiss with another towards the end of the issue. The rest of the issue is solid, anchored mostly by Brooks’ strong pencil work; most notably however were the final few pages leading up to the last page where X-Force and company are running through the halls and Kirika is blasted by an unknown assailant, revealed to be Wolverine on the final page.

I feel like the issue was a mixed-bag. The story was moved forward only marginally, focusing more on the re-establishment of the Jean Grey-Wolverine relationship rather than pushing the Dark Angel story ahead. The Jean-Logan kiss felt like it happened organically and didn’t feel forced despite the obviousness of its build-up. The emotional roller-coaster dove down from that point was blandly steady for much of the book’s middle before the incremental crescendo leading to the final page. The book successfully hit its emotional points, although the story itself was rather uneventful beyond the Jean Grey-Logan conversation and the final few pages building towards the issue’s revelation. The artwork was very good throughout much of the issue, and I was pleased with how the story was conveyed through the team’s art. Although not a great issue, it functioned to move the Dark Angel arc ahead by adding another layer to the story. Despite this being an “off” issue in story development, it still was successful in setting the stage for the rest of the arc and affords it some fun places to go.