I try to approach a new #1 issue with cautious optimism but that is the kind of glass-half-full guy I am. A slew of premier issues have been coming out fast and furious thanks to Marvel Now! and while some have not lived up to expectations (Uncanny Avengers) others can be counted among the best superhero tales (Thor: God of Thunder). Regardless, the reboot that isn’t a reboot has a lot of people talking and you’d be hard pressed to find at least one title that didn’t interest you.

Captain America #1 would seem like a slam dunk. Strong writer (Remender), legendary artist (John Romita Jr.), and iconic character but the reviews have been mixed and in general rather negative. Even our own Ed Campbell (who loves Captain America as much as he loves his BBQ) was totally unimpressed by the Star-Spangled Avenger’s adventures in Dimension Z. I must say though, I disagree with the negative reviews. The tale is a solid sci-fi epic filled with the shield-throwing antics that you know and love.

The book hits all the right beats. It starts by giving us a glimpse of Captain America’s childhood, jumps to Bond-like opener of Cap taking down eco-terrorists, and finally gives us important interaction with Sharon Carter before sending our hero into Dimension Z. Once there we get a dust-up with a key member of Cap’s rogues gallery and the first issue ends with an interesting cliffhanger. Remender has paced the story very well, and Romita Jr is a master storyteller. His pages are beautiful, the panel layout keeps the story racing along, and the overall look and design of Dimension Z is chock full of old-timey science fiction goodness. 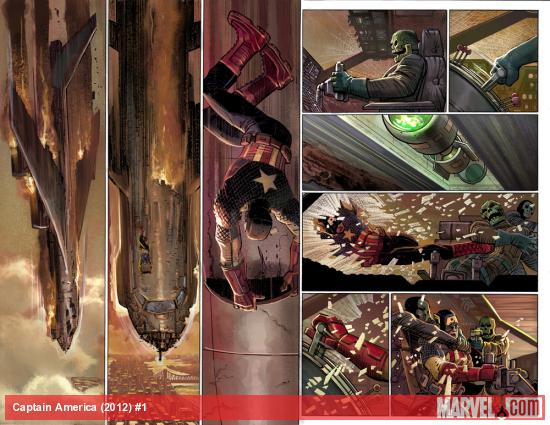 So I guess the only question that I really have is why is not to like? Seriously, you all don’t like a good story, is that it? Or you find excellent art disagreeable? I’m not really sure why I am in the minority of thinking that this book is one of the best from Marvel Now. I know that we are coming off of Brubaker’s epic run on the character but you all need to give this title more of a chance. I don’t buy the argument that Captain America’s jaunt into an alternate universe that is a distraction from his other activities in current continuity. I agree that the book could have benefited from an editorial note that said “this story takes place before Uncanny Avengers #1” or something, but is it really too much of your ability to suspend disbelief that a comic book character might be in more than one place? Rogers is already fighting the Red Skull on Earth and out in space with Iron Man and the gang so don’t tell me that you can’t handle him also fighting Armin Zola in some sort of Buck Rogers microverse.

If you are a Cap fan who passed this one by you might want to give it a second look, and if you read the first issue and were disappointed I would encourage you to shell out another $4 and roll the dice on issue #2.