Chi’s Sweet Home is an ongoing manga series by Konami Kanata about a kitten named Chi as she discovers the world around her.  Chi’s Sweet Home is just plain fun to read because Chi is extremely adorable and acts like any kitten would.  It is published by Vertical in North America and there are currently eight volumes of the series available. 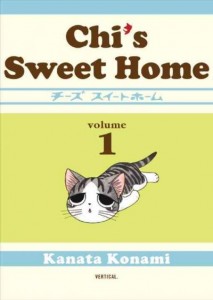 Chi is adopted by the Yamada family after their son Yohei finds Chi lost in the park.  The first three volumes deals with Chi getting use to her new family and vice versa.  Since the Yamadas live in an apartment building that does not allow pets, another subplot in the early volumes is the Yamadas trying to keep the superintendent from discovering they have a cat.  I thought this subplot would eventually get very stale so I was glad to see the Yamadas move into a pet friendly apartment building in volume four.  In the latter volumes, you see Chi learn to become a cat and meet new friends as she goes out and explores her neighbourhood.

Chi is the star of the series and she is captivating.  She wears her heart on her sleeve so whether she is happy or angry, she shows her emotions fully.  She also gets distracted very easily

which leads to some interesting situations.  In the first volume, she tries to leave the Yamada’s apartment to look for her mother but never makes it outside because she always finds something more interesting to play with or a room to explore around the apartment.  When she goes to the park, she finds so many different things to look at that she always forgets how to get home.

While the stories are mostly humourous, there is on ongoing storyline that is a little sad.  The reason Chi was lost in the park is because she was separated from her mother and her siblings while she was distracted.  As the series progresses, Chi’s memory of her mother fades.  Certain actions like snuggling against something soft triggers memories for Chi of her time with her mother.  These flashbacks are frequent early in the series but as she gets more comfortable with the Yamadas, she has them less and less.  However, there are signs that this storyline will resolve itself in a positive manner.  There are hints that her mother lives in the neighbourhood and there is even a “lost cat” sign on a park wall with Chi’s picture on it.

The art in Chi’s Sweet Home is excellent.  Konami Kanata’s drawings are clean and simple and she puts enough detail in the backgrounds of each panel as warranted.  All the drawings are beautifully coloured with watercolour paints.  Even the sound effects and motion lines are in watercolour.

Chi’s Sweet Home is truly an all ages comic.  In North America, Chi is categorized as a children’s comic which is perfectly understandable given the nature of the stories.  However, the intended audience for Chi is adults.  Chi is serialized in a Japanese magazine called Morning whose readership is primarily business people commuting to work every morning.  Chi is meant to brighten up the mood of the reader so he or she can go into work with a good disposition.

Another interesting publishing note is that Vertical publishes Chi’s Sweet Home in left to right format rather than in its original format of right to left.  I probably will

sound like a comic book snob but I prefer all comics to be published in its original format.  Vertical is categorizing this series as a children series so I think someone was worried that the little ones would not know how to read it.  I would like to think that inexperienced readers of manga are intelligent enough to adjust to the right to left format.  However, the end product from Vertical is very good and I credit that to Ms. Kanata’s art and layouts.  I did not find any problems with the flow of the panels or the lettering.

All in all, Chi’s Sweet Home is very entertaining and enjoyable to read.  This is one of the rare comic series in which you do not need to be in a certain age group to like.  For more information about Chi’s Sweet Home, go to its website.  Chi’s Sweet Home can be found in the Toronto and Hamilton Public Library systems.