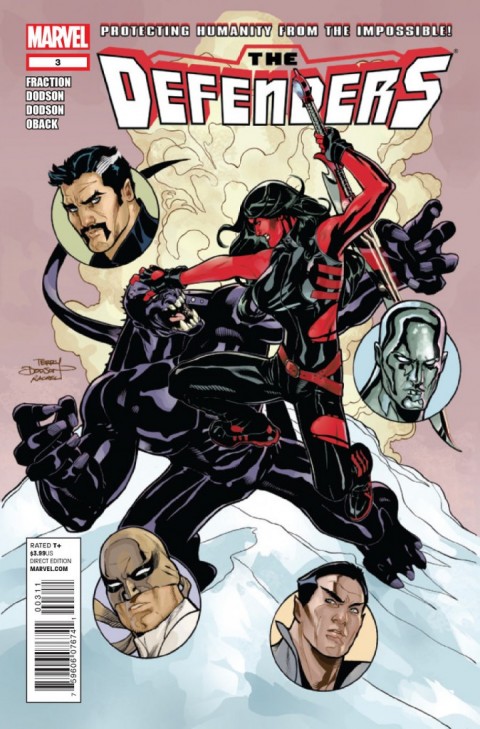 The third issue of Matt Fraction’s Defenders title was released last week.  Defenders features an interesting cast of Marvel’s lesser promoted, yet very powerful characters who have charged themselves with protecting earth from the impossible.

Requiring help to contain the spirit of rage he was possessed by, the Incredible Hulk turned to his former Defenders allies to help him track down Nul, The Breaker of Worlds. Finding him in Wundagore Mountain, the Defenders found themselves in the midst of Prester John, a time-lost warlord and alleged Templar Knight, who rules over the mountain side. Hidden within the mountain’s recesses is a machine which causes strange things to happen throughout the locale, and it’s this machine which can send Nul home, but can also destroy the universe.

Deep within Wundagore Mountain, Nul, the Breaker of Worlds, rampages forward to the secret heart of the mountain, destroying everything in his path. Nul is confronted by the Defenders as he plods towards his goal, confronted first by Red She-Hulk before Namor, Dr. Strange and Iron Fist resolve to join the fray. While Namor holds Nul in place, Iron Fist punches Nul in the chest. It continues forward, despite their attacks while Silver Surfer tries to uncover the connection between John and Nul by speaking to one of the Prester John copies. Realizing the original John is attempting to escape, Silver Surfer gives chase. As the Silver Sentinel flies off, Nul, undeterred, devastates the Defenders and arrives at the machine. He begins hitting the device, as reality shifts around him. A John copy rises from his chair, and for the sake of protecting the universe, erases Nul from existence. As Silver Surfer reaches John’s ship, the rest of his teammates decide to steal the machine.

Three issues into the run, Fraction’s revamped Defenders title feels very muddled, unaided by the strange team composition which places three of the original team members alongside newcomers Iron Fist and Red She-Hulk. The issue feels sluggish under the weight of its plot, although I suspect much of that is the result of the strange, reality, altering dynamic of the mountain’s machine which makes understanding what’s going on in the story rather cumbersome. To further complicate the storytelling, the different coloured narrative boxes were confusing to read, and I wasn’t completely sure whom was speaking at a given time which disrupted the flow of the text at first. Conceptually the story feels “out there,” somewhat beyond the realm of where these characters should be operating, creating an awkward, rag-tag element to the title. These characters are all heavy-hitters to varying degrees though, which despite the strange opening arc, leaves the story open to travel to other worlds if the book’s ending is to allude to the machine’s use for dimensional hopping. If that’s the case, I’m interested to see what Fraction has plotted beyond these first issues.

I traditionally dislike the work the Dodsons do, having been overjoyed upon their departure from Uncanny X-Men. Surprisingly, although I dislike some of the work in the issue, I enjoyed some of what they had to offer. There are times where the characters seem very static, boring or statuesque, while in the case of Red She-Hulk, she bears resemblance to Emma Frost, Rogue and Kitty Pryde from their X-Men contributions. The minor differentiations between them exhibit a dearth of creativity, leaving the Dodsons’ females with very much the same body type. I did however enjoy a lot of their Silver Surfer work, of which I would call the best offerings within the issue. I think they did a great job of presenting him in the little panel time he had, while the last few pages featuring Nul’s removal from existence and Iron Fist and Namor tag-teaming Nul were very cool pages.

I really wanted to like this book, and expected to considering Fraction’s involvement, but the confusing story detracted from the experience, requiring me to read it twice to really understand what was going on. It was difficult to follow at times, but the book has the potential to be really good. Even still, this opening arc feels too high-concept, reminiscent of Fraction’s Casanova series in some respects. Although the team composition is strange, I think they’ll provide great story opportunities together, especially if they begin to travel to other worlds. Altogether this book wasn’t as good as I hoped it would be. That isn’t to say I was disappointed in it, as there were parts I enjoyed, but it was hard to follow not knowing the background of the story, making it a difficult read for someone not following the series prior to this release.