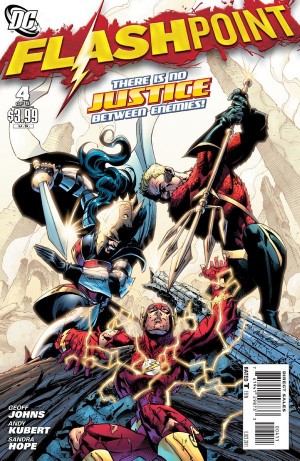 This week we’re taking a look at the fourth installment of the Flashpoint mini-series. With time running out for Barry Allen, what does the future hold for the Scarlet Speedster and can he change the course of events that Zoom set in motion. Let’s have look at issue four.

Everything changed in a flash, and before he knew what happened, Barry Allen’s life as he knew it was dramatically changed. With nothing as it should be, Barry painstakingly attempts to solve Zoom’s puzzle before the memories of his former life are replaced forever.

The issue begins with the Marvel family watching a presidential address on television at their home in Fawcett City. The kids are dejected over a previous meeting with Wonder Woman, a moment where they recount their brush with death. After further arguing with each other over what do, the kids finally resolve to enter the fray once more and combat Wonder Woman half a world away. As the kids argue, Hal Jordan prepares to take to the skies on a special mission where he has been charged to deliver the “Green Arrow” bomb to the battlefield. Before he can leave he is criticized by Hector Hammond for seemingly not taking the mission as seriously as he should, a point which Jordan takes exception to as he enters his cockpit and proclaims he’s petrified of the mission but unlike the other heroes who keep to the shadows, he’s not afraid to act and take to the skies. Hal flies off, but not before Hector wishes him good luck.

Meanwhile in Metropolis, Cyborg, Batman, Flash and Element Woman meet up in the aftermath of Superman’s escape from his holding cell. Barry has another memory re-arrangement which leaves him debilitated until revived by the Marvels at their home. Once revived, Barry looks at the television to see a news report stating Hal Jordan was one of the reported casualties of an Amazon attack. Flash takes off to the kitchen and is followed by Cyborg and Batman who eventually agree to join Barry in intervening between the Amazon-Atlantean conflict. The rag-tag team boards one of Batman’s aircrafts and is joined by other Superheroes such as Enchantress and Frankenstein. The team arrives with Arthur and Diana at each others throats. The team arrives and quickly engages, while Captain Thunder moves in and directly attacks Wonder Woman. Enchantress appears to double cross the team as she forces Thunder to revert back to his separate forms. The other kids frantically try to change back, but are too late as Wonder Woman kills Billy much to Barry’s shock. Zoom arrives on the scene soon after to mock his longtime nemesis.

Kubert has provided nothing but amazing work throughout the series, but his work on issue four stands apart from his work on the previous three issues concerning overall quality. His tremendous pencil work aside, I liked how he kept his page layouts varied throughout the issue and didn’t maintain a static page composition; nicely varying the artwork between full-page spreads, two-page spreads, or pages with panels numbering anywhere between four and 11 panels on the page. Even at the higher end, the quality of work didn’t deteriorate. Complementing Kubert’s pencils was the colouring work of Alex Sinclair who gave life to Kubert’s fantastic pencils, great examples including once Captain Thunder is torn apart, when Billy sees into Barry’s past and the great page featuring the rag-tag Justice League arriving on the battlefield to prevent further escalation among a book full of great work. Kubert also did fine work in drawing characters and their shifting emotions, notably the conversation between Hammond and Jordan which begins with Hammond angrily scolding Jordan’s cockiness, but the roles become reversed as the conversation wears on. Kubert nicely details the minute changes in facial structure to depict and convey varied emotions, where Jordan instantaneously becomes deadly serious and determined, while Hammond becomes taken aback and understands what drives Jordan. Fine touches like these are littered throughout another great portfolio’s worth of work that Kubert has provided.

Flashpoint has been an okay series to this point, but beyond clearly setting up the DC 52 re-launch, I have trouble grasping the immensity of the story and why I should care as a reader. I don’t feel like the story is shaping to be as big as the company has hyped it to be, much less justifying the ridiculous number of tie-ins to the main mini-series. There were points in this issue where allusions were made to prior events that occurred elsewhere, which as someone who hasn’t read the Wonder Woman book, is completely lost on me. Moreover, the story itself just isn’t interesting. Although horrible what’s happened to Barry’s life, I fail to sympathize with the character’s plight, and more, we have no cause at this point as to why Zoom is going to these lengths other than to ruin Barry’s life. It’s too simplistic a story and not very engaging. The series is very much based on altering the timestream to change history and functions perfectly to set-up the re-launch on that premise. However, I feel like the series is falling flat and after four issues, simply hasn’t delivered.