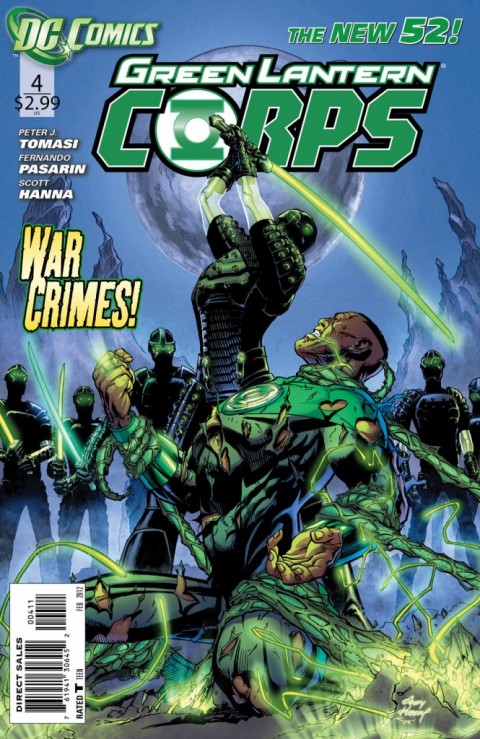 With the relaunch of the DCU, the Green Lantern Corps title saw a shake-up with the departure of GLC mainstay Kyle Rayner to New Guardians while Corps veteran John Stewart moved over from the main title to join Guy Gardner. Now four issues in, let’s take a look at how the book is shaping up.

A mysterious force has been killing Green Lanterns left and right and John and Guy have taken a team deep into space to end this intergalactic threat. The team arrives on the planet Xabas, only to come face-to-face with the Keepers. The Keepers quickly dispatch many of the Lanterns and gain the upper hand and force Guy and John to call a retreat. Many of them transport back to Oa using one of the present Lantern’s natural teleportation powers, but they quickly find that Stewart and a small number of Lanterns have been left behind to fight for their lives.

At the outset of the issue, Stewart goads the Keepers into fighting, which they quickly oblige. Despite his zest to take on the Keepers’ many numbers, he quickly finds that his energy supply, much like his team members’, is depleted. With their power rings useless, one of them attempts to attack a Keepers with their own green energy swords, a tactic which fails as they’ve been programmed to deactivate if used against them. With no other option, John Stewart attempts to invoke an intergalactic treaty which surmises that one force must accept another’s surrender and treat them (presumably) as prisoners of war. The Keepers balk at the request, and kill one of the four lanterns, striking them through their cranium with an energy blade. Another Lantern, Vandor, becomes enraged but is restrained by John who tells him now isn’t the time, and if they’re going to die they have to make it count. Back on Oa, Guy continues his attempts to extract information from the Keeper they took prisoner. Conferring with Salaak regularly, Gardner is taken aback by the news that the Guardians do not recognize the Keepers’ physiology. As other Lanterns who were present in the initial fight take out their frustrations stemming from their failure, the Martian Manhunter makes an appearance, much to Gardner’s surprise. After explaining who he is and where’s he’s from, J’onn J’onzz tells Gardner of the Keepers’ origins: they are what their name implies, and are the guardians, albeit formerly, of something sacred. The Lantern batteries.

I suppose one of the cooler aspects of this book is that because it’s a story set in space, there’s no shortage of stories that can be told within the confines of its 20-something pages. Even better, Tomasi has done so in a way that expands the GL mythology a little further by introducing a layer of intrigue as to the relationship between the Guardians of the Universe and the apparent (former) Keepers of the Batteries. In GL lore, the batteries were traditionally kept in a pocket universe, where they were protected by these new antagonists who seem more than capable of taking out the entire Corps. What I enjoy is that the Keepers are clearly a new threat and not something that’s being rehashed from a previous story, which is also interesting as we have to wonder as readers what precisely caused the falling out between the Guardians and the Keepers. With John and his small team still stranded and Guy back on Oa with everyone else, the issue is about equally split between the two title characters, although it feels like more weight is given to John Stewart’s story. It’s here though that we see Tomasi still trying to get a strong grasp on how to write John Stewart, a character which for the most part seems new to him, unlike Gardner whom he’s been writing since the Sinestro Corps War. I think he’s got a decent handle on the character after these few issues, but I think it’s just going to take time for him to find John’s voice, and when he does I think we’ll see a great duo in the book composed of Guy and John. Although initially I wasn’t that impressed with the story arc, after giving it some thought, it’s actually pretty good.

There’s very little to be said about Fernando Pasarin’s pencils, and the work of Hanna and Eltaeb on inks and colours in this issue. It’s really, really good. There are some very cool pages throughout the issue, such as when the Keeper runs his energy blade directly through the head of one of the stranded Lanterns. Here we see the end of the of blade clearly coming through his forehead, while the amount of force used is exemplified by the immense splatter of purple blood exploding from his head. With Guy on Oa, the art team tried a bunch of different things with Gardner’s constructs, creating cameras to take pictures of the captured Keeper before Guy smashes one of them into his face with all of its little screws, bolts, lenses and inner/outer workings exploding on his nose. They also took a simpler approach, encasing his hand in solid green construct energy as he punches the Keeper in the forehead; little sparks fly from the impact. Placing Salaak as one of the one head Lanterns, he essentially has most of the Guardians’ information at his finger tips, indicated by the number of screens around him functioning as databases for him to use to communicate with other Lanterns. It looks really nice on the page. I also enjoyed the pages featuring some of the mainstay Lanterns venting their frustrations after leaving John and company behind on Xabas, especially the Isamot Kol and Hannu pages, which look fantastic. With Kol specifically, I liked the inking and colouring of the panel where the four Keeper constructs hammer down on Isamot’s former location and his simply leaps into the air with sparks of green energy flying everywhere. I loved the artwork in this issue, and look forward to seeing more of the team’s work in the future.

Although initially lukewarm to the book, I’ve taken to Tomasi’s story arc with this last issue. I’m really liking the dynamic between Stewart and Gardner in hindsight, and feel that now with Rayner out of the picture in the title, Gardner can freely take the central role while Tomasi can spend a considerable amount of time building up Stewart without really feeling obligated to give character B more panel time than character A. I like the direction the story is taking, and I love how it’s expanding the universe similarly to what New Guardians is doing. The story is coming along and the artwork is as solid as it’s ever been, and together we’re getting what is going to be a solid series.