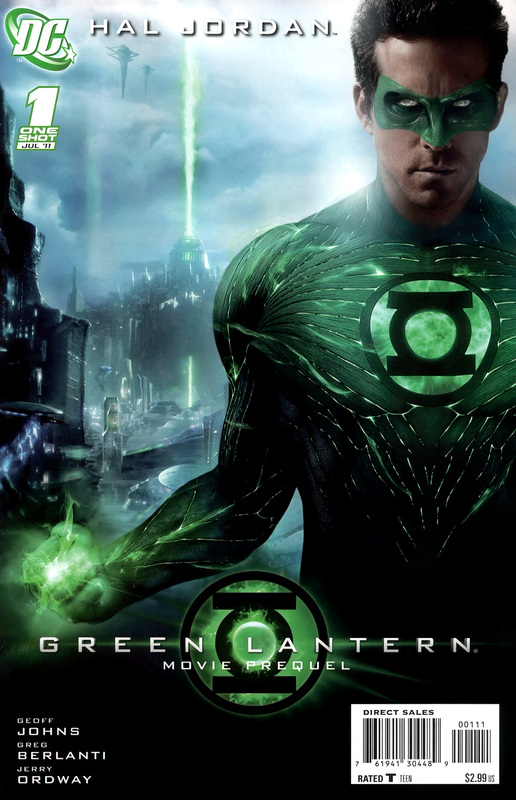 By now you’ll have seen the Green Lantern movie, and if you haven’t, you probably won’t at all. To supplement the film, DC opted to release five tie-in one-shots focusing on characters in the film. Preceded by issues focusing on Tomar Re, Kilowog and Abin Sur, the fourth one-shot centres on Hal Jordan and is penned by Green Lantern guru Geoff Johns and one of the film’s writers, Greg Berlanti.

Abin Sur, the greatest Green Lantern of all, is dead. As per the Green Lantern Corps’ selection process, the ring flies off and scans for a replacement, finding one in a cocky test pilot named Hal Jordan.

After viewing brief memory scans chronicling how Jordan received his ring, we find Tomar Re and Sinestro mid-conversation as they discuss his selection. Despite Sinestro’s revulsion at the ring’s choice in a human ring bearer, Tomar tries to assure Sinestro that the ring chose him for a reason. Several scenes are scattered across a two-page spread showing Hal in a bar with Carol, a conversation with his father, a shared kiss between Hal and Carol, his punching of a superior and the moment he received his ring from Abin Sur. Sinestro presumes Jordan to be reckless, insubordinate and afraid, but Tomar soldiers on in trying to convince Sinestro of Jordan’s capabilities. Tomar points to all of the great things humans have accomplished, such as the pyramids, landing on the moon, and people like Martin Luther King Jr and Gandhi. Still unconvinced, Sinestro demands to see whether there were any other humans the ring could have chosen, showing a young red-headed man named Guy Gardner. Still believing humans unworthy, he demands to see the genesis of Jordan’s fear, showing the plane crash that killed his father during a test flight. Sinestro concludes Jordan is full of fear, arguing that if they are to defeat fear, the Corps must be impervious to it. If they aren’t, Sinestro questions what hope they have of defeating Parallax as he flies away. Tomar looks on, asking himself inquisitively, “what hope indeed,” as he peers at Jordan.

Entitled Being Human, this Green Lantern movie one-shot fills in some plot points of the movie relating to Jordan, specifically regarding the contrasting and polarized viewpoints Tomar and Sinestro have about Hal Jordan’s selection. The scenes take place during the film’s sequence where Jordan has arrived on Oa and is undergoing diagnostics. However, there’s very little here that adds to the film’s narrative. With minor exceptions, many of the scenes are almost straight out of the film. The biggest addition to the plot, to be fair, is mention of Guy Gardner as another potential Lantern. Other than these, the issue offers very little that’s new, plus if you dislike the film you’ll have no reason to dive into this book. The issue also features a back-up story featuring Ngilla G’rnt from the film, but the story is a typical tale of an individual receiving the Green Lantern ring and immediately finding themselves in trouble. It very much mirrors the exchange between Jordan and Tomar in the film, but is otherwise an unnecessary throw-in that I didn’t even read at first.

The majority of the issue is set out according to horizontal panels, while Ordway pulls scenes in and out from the reader’s eyes throughout the issue. Ordway pushes the action as far back as a bar room brawl and as close as focusing right in on Sinestro’s eyes. Ordway produced a nicely varied range of work in the issue, but it was his work on Tomar Re I enjoyed the most. Combined with Eltaeb, the art team constructed an amazing depiction of the fish-scaled Green Lantern. Tomar-Re’s uniform is covered in fish scales as is his face; it’s altogether a nice representation of the CGI created character from the film. I also enjoyed Sinestro’s inclusion and his emoting over Jordan’s selection as a Green Lantern. The argument between Tomar and Sinestro is captured at varying stages as they continually argue over Jordan throughout the issue. Tomar’s depiction as a calm, inspiring mentor is contrasted by Sinestro’s more aggressive tone. Together they come off well. The best pages though are the single and two-page spreads such as the one where we see Jordan’s various memories, the scans of Jordan’s respiratory and nervous system, and the nice page depicting some of history’s great men and the accomplishments of humankind. My only real complaint with the artwork is its over-reliance on horizontal panels, neutering the book of its artistic diversity. I feel some variation would have benefited the book and complemented the nice pencil work and more dynamic and ambitious pages.

Keeping with the theme and purpose of these prequel one-shots, Being Human continues the previous one-shots’ purpose of expanding the film’s plot and effectively filling in the back story behind the primary characters’ involvement in the film’s larger universe. While the other three issues were good, I felt like this issue was very weak and didn’t particularly offer any real supplemental material to the film. Moreover, despite this being the Hal Jordan issue, this one-shot focused more on the initial reactions to Jordan’s selection from Sinestro and Tomar. In that regard, much of the book is composed of scenes from the film, with few additions beyond those. I’m not sure how entirely necessary this issue was as it didn’t elaborate on the larger story much, if at all. This issue does little for me as a reader and pales in comparison to the previous three one-shots. With four one-shots released, although the Jordan issue was disappointing, I feel the Sinestro issue is still the one to watch. Unfortunately this issue feels like a waste of time.